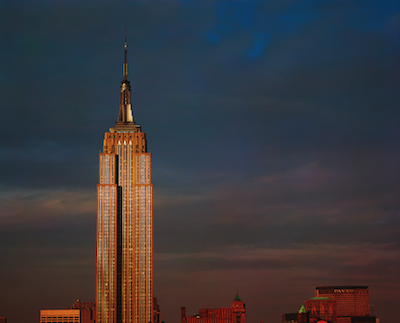 It was about six months after I moved to Tribeca when I met him. At night I would lie awake and listen to the noises in the street, missing the stars and the silence of home. He would roll over, sleepily, and put his hand on my heart, knowing I was wishing slumber would find me.

"Tell me a story," was my nightly response.

He told them all—from childhood adventures to boozy business trips. But he'd eventually doze off while I waited for the sun to rise, wondering if I would ever find rest here in the city that never sleeps.

One night, after the stories ran out and Ambien had failed me (that's an entirely different story), he appeared in the bathroom while I was brushing my teeth.

"Go put on your shoes and your coat," he told me. "Put them on right over your pajamas," grinning as he did the same.

He grabbed his wallet, his keys, and my hand. And we were off, down the stairs, into the crisp night air.

"Where are we going?" I asked him.

"To put the Empire State Building to bed," was all he would reveal, smiling as we strolled up Sixth Avenue, hand-in-hand.

When we reached Bryant Park, he found a bench and we both sat down. One arm draped around me, he pointed at the sky.

"Over there is the Chrysler Building, it stays awake all night, keeping watch over the city, standing tall and making sure we are all safe. I like to think that up on the highest floors, there's a top secret factory where dreams are made and they float down and out of those twinkling windows to find us in our beds."

"Here," he pointed again, "is the Empire State Building. It would like to stay awake all night with the Chrysler Building, but it spends all day running people up to the observation deck to show off the city, giving everyone a glimpse to take home with them. And it shines brightly once the sun goes down—tonight it's orange and blue for the Knicks' home opener. But the Empire State Building needs to rest just like you do."

He pulled me close, and I noticed he glanced down at his watch before he continued.

"So every night at midnight it's lights out..."

And at that very moment the Empire State building disappeared from the sky. Enchanted, like a child by a magic trick, I wanted to beg to see it again.

Ever since that night, I have found myself searching out the Empire State Building just before midnight with the hope of making it "disappear". When I put myself to bed now, I close my eyes and drift into sleep like the majestic building, knowing sweet dreams will come and find me.