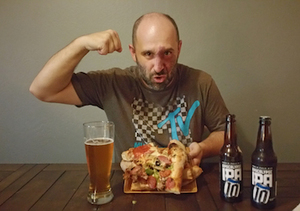 2016 was a good year for me. I’d started contributing to Playboy, Vice, and Sierra Club Magazine. For years I’d been writing for weekly newspapers in my area along with some random publications, as I could get them. My biggest problem wasn’t with getting work. I really wanted to start writing better, more in-depth features. So I needed a little help to deliver the kind of quality articles I wanted to write.

My writing career began in 2010. I never went to school for journalism. I studied film, but hated the work once I finished college. Writing on the other hand, suited me much better. I started out by volunteering at community papers, and eventually started working on a freelance basis with the alt-weekly in the town I was living in. My ambition and experience were critical to becoming a better writer, but years later, there were still holes in my knowledge. I remember the first time an editor told me my story was missing a “nut graph,” and I had no idea what that meant. Thank God for Google.

At the beginning of 2017, I enrolled in Gotham’s 10-week Article Writing I class. I read each lesson slowly and carefully, taking notes, and making sure that I understood each detail of writing a feature article. Much of the information was familiar to me, but more something I’d picked up through experience. Going through each component of the feature article, being told the names and purpose of each elements, as well as given different examples of different ways to go about doing it, had a big effect on my ability to consciously apply my writing skill set to an article, rather than just stumbling into it after enough revisions and notes from the editor.

During the class I worked on an assignment I had with Playboy about Trump voters that since regretted their vote. I was able to submit my article to the class before giving it to my editor. Several comments I got from the teacher and my classmates were very helpful. Also, just applying the lessons to the article really helped me write a stronger piece. I particularly liked the lesson in the “body” section that suggested you take each part of the body, write it on a notecard, and place it on your desk, so you can visually move it around to get the best possible article. That helped big time.

My article ended up getting a lot of attention online. My editor at Playboy told me that the executive editor was very impressed with my piece. He told the staff that the article was “beautiful, smart, and definitely sympathetic. Really great work.” I also got an email from the editor of Salon, who’d read the article. He invited me to pitch to the publication.

What I learned from the class, and the success from this article has given me confidence to set my sites on bigger publications, and pitching the kind of feature style articles I’ve always wanted to write.