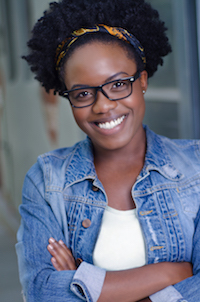 I started out as an actor and playwright, but had never written for screen. So when I decided that I wanted to try my hand at TV writing, I signed up for TV Writing I at Gotham Writers Workshop. And I’m so happy I did because that class was the beginning of my TV writing career.

My class was run by the amazing Pete Jensen, who was a hilarious, supportive and smart teacher. Under Pete’s guidance, I wrote my first ever TV spec (for Parks and Rec) and that script placed in the Austin Film Festival. With that validation that I was on the right path, I wanted to continue expanding my skills as a TV writer; so I enrolled in the TV Pilot writing class, also taught by Pete Jensen. Pete was a supportive teacher not only in the classroom, but also outside of it—he wrote me recommendation letters for writing fellowships and checked in on how my writing was going when I wasn’t enrolled in class.

Soon after taking classes at Gotham, I moved to LA to pursue TV writing. I started out as an assistant on the show Bones before getting accepted into the Disney ABC Writing Program. In the past two years I’ve been a writer on several ABC sitcoms: Imaginary Mary, The Goldbergs, and The Mayor.

I’ve recommended Gotham Writers Workshop to many friends because I really do believe that it played a huge role in my TV writing journey. So thanks Gotham! And thanks Pete!