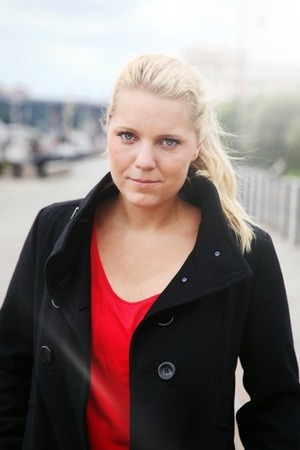 It’s been two years, ten days, seventeen hours and thirty minutes since that day. The day when I finally sat down and decided: “Ok, so I’m writing a book.” During four days I hardly ate nor slept, and then 80 pages were done. And then, I did nothing. Until two months later, when my boyfriend and I took six weeks off work, flew to New York, and took a Creative Writing 101 class at Gotham Writers’ Workshop.

My wonderful teacher Stacy Parker Le Melle, my boyfriend, the classmates, the time off work—and New York City—proved to be exactly what I needed. While struggling with writing in English for class, I literally felt how all the creativity was just dying to ”get out” in Swedish. So I wrote. And wrote.

I spent the summer rewriting, finishing, polishing, editing. And then it was 430 pages long, and I sent it out. A publisher liked it, wanted it, handed me a contract—soon after, a deliveryman rang my doorbell and handed me the very first book from the very first edition of Fadersmord (in English, Patricide).

From the bottom of my heart: Thank you for being such a big part in making this happen.