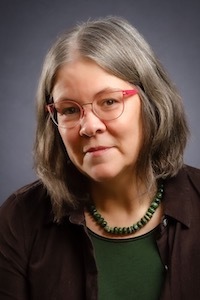 I’m a library brat. Thanks to my mother’s career as a children’s librarian who reviewed books there was always a variety of kid-lit books around our house. I was allowed to read anything that caught my interest. If I wanted to read picture books for two weeks, fine. YA books, fine. If I wanted to tackle War and Peace, fine. (Mom did hide her copy of Fear of Flying, which meant that I read the entire book once I found it. For an eleven-year-old it was both dull and upsetting.)

My interest in kid lit persisted into adulthood. I hung around the children’s literature stacks in the library where I worked. I browsed the younger-readers section of the bookstore. “Are you buying all those?” my husband asked as I carried a stack of Beverly Cleary and Erin Entrada Kelly to the counter. Yes, I was. I asked my friends what their kids were reading, and once my son was old enough, I paid attention to what he liked too.

In the winter of 2013, I got the idea to write a book for children myself.

I wasn’t new to writing. I had an MFA, an unpublished novel stuffed in a bookcase, and many short stories in literary magazines. What spark lit the kid-lit fire? I have no firm memory, although I do find recorded in emails and journal entries a growing uneasy realization that, after years of hard-core effort, my career writing literary fiction wasn’t exactly taking off.

I knew I wasn’t going to stop writing for that audience, but I was ready to widen my scope and try something new.

I knew enough about writing (any project, from a technical manual to a poem) to figure out that writing for younger readers would have its unique set of challenges. I hoped it might be easier than writing for adults. (Spoiler alert: I was wrong about that.) But I didn’t know any kid-lit writers and I had taken no workshops in the genre. The few craft books I read didn’t address the specifics I needed to know.

Everybody seems to know about the courses at Gotham, by osmosis if nothing else. And if they don’t know about Gotham, they should.

Interested in writing memoir? Gotham has a course for that. Poetry? There’s a course. Mysteries? There’s a course. You can sharpen up your grasp of basic grammar. You can learn how to use social media. (Note to self: sign up for that course.) And you can do it all online on your own schedule, which was great for me, busy with full-blown adulthood in all its messy glory.

Under the Fiction category I found Children’s Book Writing. There was Level I (for people exploring the entire genre) and Level II (for people trying to finish actual writing projects). Even though I had a good grasp of how to write, I wanted an overall introduction to the genre, so Level I seemed right for me.

I signed up with a teacher named Margaret Meacham who had a background in children’s librarianship and children’s books published in a wide variety of genres, from mysteries to realism. Our weekly assignments introduced the class to the wide variety of current books for young readers, everything from picture books to nonfiction to middle-grade fiction. Middle grade fiction (books for older elementary and middle school readers) appealed to me right away

Thanks to Meacham’s lectures and personal comments on our work, I quickly figured out some of the more challenging aspects of writing for kids—immediacy, specificity, humor, pacing, and believability. And Meacham introduced us to this great quote by writer Isaac Bashevis Singer from his essay “Are Children the Best Literary Critics”:

Children are the best readers of genuine literature. Grownups are hypnotized by big names, exaggerated quotes and high-pressure advertising. . . But children do not succumb to this kind of belief. They still like clarity, logic, and even such obsolete stuff as punctuation. Even more, the young reader demands a real story, with a beginning, a middle and an end, the way stories have been told for thousands of years.

Middle-grade kids finish a book because they are vested in its story.

No kid powers through a boring, insipid book because it got a great review in the NYTBR.

It was the best bit of kid-lit writing advice I could have gotten.

By the end of our ten-week class, I had started working on a novel. It was a book about a girl who’s grown up in off-the-grid Alaska but finds herself (because of her parents’ divorce) having to adjust to suburban American life. Think of Hatchet backwards, with a girl instead of a boy and that girl challenged by your average middle school instead of the wilderness.

My road to publishing that novel wasn’t quick or short, but after my start at Gotham I never felt truly lost again. After a lot of research, rewrites, and summers off to spend time with family, the book found an agent, and that agent found a publisher. 365 Days to Alaska came out from Abrams/Amulet in January 2021 and is available from fine booksellers everywhere.

I’ve always wanted to say that, and now I can.