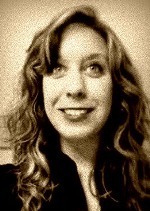 In Fall of 2007, I was twenty-one years old and living in Williamsburg, Brooklyn. I'd undergone some heavy changes that summer-my brother, who was also my roommate, moved to Europe, and a close friend of ours took his life a few days later. Writing in my journal was something I started to rely on, and it brought me joy. I worked in Manhattan, and one night I took one of the Gotham newspapers out of the yellow box and brought it home. I signed up for a Creative Writing 101 class with Sarah Grace McCandless and begged my parents to help me pay for it.

In Sarah's class we did a mixture of fiction and nonfiction exercises, and it became clear to me that nonfiction came more naturally to me. I think the most interesting part of this story is that my book-to-be-published will be with the same press that published Sarah's first book: Future Tense Books. One day she brought her book into class and all I could think about was how lucky she was-how I too, one day, wanted to write a book.

My boss where I worked saw how happy writing made me, and for Christmas she bought me my next Gotham class: Memoir I, with Katherine Dykstra. This class was a turning point for me. I realized I wanted to be—and I could be—-a more serious writer. I wrote two essays in that class so unabashedly that they break my heart now.

Since that class taught me so much, and I could truly see myself becoming a stronger writer, I took Memoir II, with Cheryl Burke. Cheryl was a kind and down-to-earth teacher, almost like a broken-in friend. She was living proof that being a writer was a real thing-that it could be a career just like anything else.

I left New York for the West Coast after that, having some writing skills under my belt. I wrote in Seattle, Washington for one year until I went back to Brooklyn. I didn't feel finished with Gotham, so I took one more class, with Gotham teacher Melisa Febos, where we fine-tuned my essays, and I began lining them up like a collection.

While in Seattle, a friend told me that Kevin Sampsell of Future Tense Books might like my work. I emailed Kevin and he said, yes, he liked my work, but that he already had the next three Future Tense Books lined up. He told me to keep in touch. A little over one year later—when I knew my manuscript was ready yet didn't know what to do with it—Kevin Sampsell emailed me asking me to send him my manuscript and told me that he was interested in hearing what I was up to. He decided to publish my book of essays.

Since then, I've learned about the book process and my life has progressively changed. Had I not invested so much time at the Gotham Writers' Workshop, I highly doubt I would be in this position. Gotham graced me with skills, encouragement, and confidence in my writing. It was a vital period in my life and I am grateful to Gotham from the deepest part of my heart. My book of essays, Legs Get Led Astray will be released in April of 2012, and it is now ready for pre-order. The book will include some of my work that I wrote during my Gotham classes.