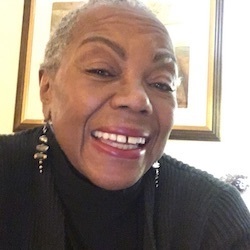 I am writing to say “THANK YOU.”

Upon my retirement in January 2011 from a nursing career of thirty-four years at Harlem Hospital Medical center, I wanted to write about my life of growing up in Harlem. My daughter suggested I take a class at Gotham.

In August 2011, I took my first Memoir I class with Kelly Caldwell. I knew nothing about how to write a story. I just knew in my heart I wanted to write my life story of some traumatic events, poverty, teenage motherhood, survival, and triumph of it all.

The first draft of my story was bad in every way—grammar, syntax and structure. Kelly’s comments, grammar corrections, and lectures helped me to learn the basic of memoir writing. I also took an intensive Grammar course at Gotham.

I continued my classes at Gotham and advanced to Memoir II. The “Boothing” process and discussion with my fellow writers have been immensely invaluable to me. A special thank you to Anne Konneberg and Jackie Mckeown who peeled the onion layers away.

Kelly, my mentor has helped me to find my voice and confidence in my writing. In early summer of this year, I expressed to Kelly that I felt my story was going in circles. I lamented, “Who would really want to read my story?” As always, Kelly’s encouragement and critiques ended the conversation with, “So Christola in your next draft...”

About a week after that conversation, I received notification from Alternating Current Press that I was a Finalist for the “Still I Rise Award” for Black women writers to which Kelly had encouraged me to submit several chapters of my story. They also requested to publish two of the three stories I submitted. I was beside myself with joy.

And the lightening of joy struck again. In June I received an email from The Bread Loaf Writers Conference that I was awarded the 2017 Katherine Bakeless Nason Scholar in Nonfiction.

So, six years after enrolling in my first Memoir class at Gotham, I’m a writer, soon to be published, and a Bread Loaf Writers Alumna.

A very special thank you to Kelly for her never-ending encouragement, laser beam critiques, lectures, and “in the next draft…”