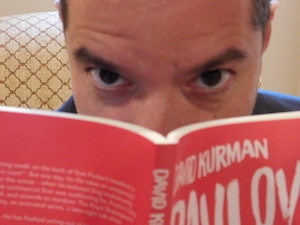 I tried not to. I really did.

I didn’t want to write a book.

Deep down, I had always dreamed of getting published, of course. Well, not always. I mean, be fair, as a baby I wasn’t crawling on my bloated belly, face-down on a tattered and soiled rug wondering where I was, fretting about where my next bottle was going to come from and thinking about getting published.

But a few years ago, something happened. Ideas just kept coming to me like a bad case of acid reflux.

As I reviewed that bloated first draft, barely legibly scrawled with a fat purple crayon on the back of roadside diner placemats, I knew that my book had potential to be just like a classic Italian opera: laughs, tears, adventure, romance… except the book isn’t performed live and there’s no singing and it is (technically) in English. And, sadly, tragically, on the whole, my plot didn’t entirely make sense.

So I turned to the one place I knew I could get the right kind of guidance: my retired, out-of-work and vaguely alcoholic former tai chi sensei. After an exhaustive search, I discovered he was actually dead. Which, turns out, was one of the best tragedies to ever happen near me because he not only bequeathed me his belts (and a few shirts, shoes and four-and-a-half pairs of socks) but also because it led me straight into the arms of my back-up solution: Gotham Writers Workshop.

Partly due to my paranoia, anxiety and dependency on various narcotics and partly due to numerous legal entanglements and commitments, I decided to forgo a class environment and instead sign up for a four-hour one-on-one session with Lev. He was encouraging, yet honest; inspiring, yet realistic; constructive, yet challenging. In short, he was everything you would expect Ryan Seacrest to not be if you ever met that self-important son-of-a-bitch.

I owe an immense debt of gratitude to both Gotham and to Lev. Once I found a willing publisher (the good and honorable people of Roundfire Books), you helped me accomplish the most ambitious and passionate item on my lifetime bucket list. And if you can help accomplish the second (wrestling alligators for money in a backwater Florida swamp), you will have really accomplished something.

Thank you Gotham! Thank you Lev!