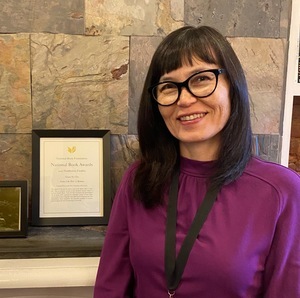 Now that this whirlwind of a year has finally settled, let me take a moment to thank you for all you’ve done, because this year could not have happened without you.

Tastes Like War, my memoir about searching for the social roots of my mother’s mental illness, was published by the Feminist Press in May of 2021. That spring, when I got an invitation to speak at the PEN World Voices Festival, I was thrilled beyond belief and could not have imagined what was yet to come. In September, I would become a longlister for the National Book Award. In October, a finalist. The NBA recognition launched a year-long media tour and opened so many other doors for me, but more importantly, it allowed my mother to become the star she’d always wanted to be.

If you had told me that this was the journey I was about to embark upon when I first walked through your doors eleven years ago, I would have doubted you. But I did know that I was on the cusp of something transformative.

I met you at a time in my life when I was exploring new freedoms. I was a newly tenured professor, freed from the constraints of academic writing and the edict of “publish or perish” for a small audience of so-called experts. It was my first paid sabbatical, so I was freed from the demands of teaching too. With you, I discovered the joy of being a student again.

But there was another terrible kind of freedom that I was still learning to navigate—the freedom of having been orphaned after my mother’s sudden death, my ties to other family members also severed once my mother was gone. Her death left me unmoored, but also awash in long-forgotten memories of her better days, before she began to suffer from what Western psychiatry calls “schizophrenia.” I wanted to capture that vibrant and charismatic mother of my childhood, who returned to me so powerfully during my grief, and so I began to write down those memories.

I was no stranger to writing, having already written a hybrid academic book inspired by my mother’s life and struggles during the Korean War and post-war South Korea, but I didn’t know the first thing about writing memoir. I had scarcely even read memoir until I met you.

In the spring of 2011, I enrolled in Marie Carter’s Memoir I class, where I learned the basics of craft and—for the first time since grade school—wrote dialogue. I was awestruck to watch the memories I had furiously recorded in the wake of my mother’s death transform into memoir. The “booths” I wrote for that class would eventually become the chapters “Madame Mushroom” and “Umma” in Tastes Like War. In Marie’s class, I began to see myself as a writer of creative nonfiction, an identity that was about to be temporarily displaced by that of “mother.”

With a newborn baby in my life, some people would tell me that writing was no longer necessary, but becoming a mother made me hunger even more to understand my own mother’s life. Two years after my son was born, I returned to your memoir classes and became a repeat student, writing intensively during my summers off from teaching for the next few years.

I was particularly drawn to the classes of Cullen Thomas for his meticulous examination of truth and perception, and of creating a bigger picture beyond the self. Both of these concerns aligned with my training in postmodern cultural studies and sociology.

“I think there’s a bigger story here,” Cullen would sometimes say about my hesitance to expose some of the shadowy spaces of my family history. “But I already wrote about that in my first book,” was always my gut reaction. Upon digesting his feedback, I knew he was right that I needed to write the bigger story.

Whenever students raised questions about how to deal with family members or others who might oppose your writing, Cullen replied, “Write as if you’re whispering your story to the wind.” In other words, don’t let those fears stop you from writing. You can always edit once the story has been written.

I carried those lessons with me, along with the community of writers I met at Gotham. Some of us formed offshoots to start our own writing groups, and that community saw me through to the completion of the first full draft of my book manuscript.

Thank you to my teachers, Marie, Stacy, and Cullen. Thank you to my fellow Gotham grads and writing buddies, Christine, Starina, Courtney, and Michael. Thank you, Gotham, for making this road with me into a new chapter of my life.

You can learn more about Grace and her writing at www.gracemcho.com or follow her on social media @GraceMCho.