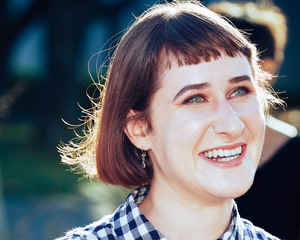 Let me tell you a story.

Once upon a time, in a land far, far away — full of snowy mountains and rivers of chocolate — there was a young girl who wanted to grow up to be a writer. She loved nothing more than reading books way past her bedtime and thinking up her own stories. After school, she would rush back home to type up her soon-to-be bestselling novel on her family’s bulky computer. (“Once upon a time” was the 2000s, you see. She still remembers Clippy, Microsoft Word’s paperclip assistant, fondly.)

The novel, of course, never got finished. The young girl was too smart for her own good. Having read so much, she knew enough about the world to know that becoming a writer was improbable, if not impossible. So, she turned her ambition to other things. She became an award-winning theoretical physicist and ballet dancer. But she never stopped being the kind of person who falls asleep cradling a book instead of a teddy bear, dreaming of writing again one day.

Every fairy tale, of course, needs a love story. The girl learnt English in secondary school, and she fell hard and fast. Over the years, she made the English language her own, like growing an alien but beautiful new organ. But in her far-away land, no one else had grown a second heart that beat to the rhythm of English, and so she felt alone.

That is, until the day the fairy godmother arrived at her doorstep. Her name was Gotham.

Gotham, the first ever writing class I took was one of your weekly Zoom Write-Ins last winter. That Friday evening, I was given my first ever prompt. I remember it as if it were yesterday: truck stop restaurant on Thanksgiving. I remember laughing because it was so utterly American. This girl from Switzerland didn’t know the first thing about Thanksgiving, or truck stops for that matter. By the time our fifteen-minute writing sprint was over, I had only managed a handful of sentences. But I liked them. So, once the Write-In had ended, I continued writing, and days turned into weeks turned into months. And then there it was: my first completed short story.

After that very first story, about a young male hooker at a truck stop, I was, well, hooked. (I now know a lot more about truck stops. You know you’re a writer when your Google search history is beginning to look rather…interesting.) I wanted to throw myself into a ten-week workshop, and, Gotham, you kindly allowed me to skip a level to dive straight into a Fiction II with Jon Gingerich, on Zoom. What a blast I had workshopping that story and others with Jon and my brilliant classmates! Telling you it was worth pulling an all-nighter every Monday for ten weeks, really says it all. (Thanks, NYC–Zurich time difference, for the eyebags!)

But my first story’s journey wasn’t over. On a whim, I used it to apply to the London Library’s Emerging Writers Programme 2022/23. The London Library is the world’s largest independent lending library and one of the UK’s leading literary institutions. Its Emerging Writers Programme is a prestigious one-year residency for writers at the start of their professional careers.

Being the writing greenhorn that I am, I never thought I would get in. But then I did. And then I got contacted by a literary agent at one of London’s most renowned agencies.

A couple of hours after I had gotten my acceptance letter, I was in my kitchen baking granola when it suddenly hit me: only half a year after that first Gotham Write-In, I can legitimately call myself a writer now.

It all started with you, Gotham. Thank you for opening your doors to the world with your Zoom classes, welcoming this girl from Switzerland into your community of writers.

Thank you, Gotham, for making my fairy tale come true.

You can learn more here about the London Library’s Emerging Writers Programme 2022/23, where you can find me at the top of the list.