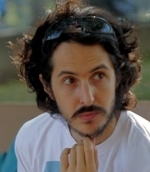 It has been just over two years now since the first words hit the paper of my feature screenplay David. Like many aspiring writers in my position, there is a desire to make your first feature film, but, as we all know, it starts with page one. And page one can be daunting, especially knowing there are 90-plus more pages waiting right behind it.

I had passed the Gotham newsletter booths about a hundred times since moving to the city and this time decided to take one of the pamphlets. Easy enough. A new quarter of classes were starting the following week, the price was very reasonable, with a one day a week commitment...so I joined.

What started out intimidating quickly gave way to camaraderie as the whole class structure was designed around peer support. It was a ten-week course and we were expected to write ten pages a week equaling a first draft of a script by the end of the course. Michael Eldridge, an acclaimed writer in his own right, had such a knack for teaching. There are many talented writers out there that can't teach, and vice versa, but he had both skills and really put in the extra effort. He had a way of encouraging his students to not give up and to keep pushing forward, yet gave very helpful critiques that always seemed right on.

Right now, the film is completed and recently won the Audience Award at the Brooklyn Film Festival. It's also showing at the Montreal World Film festival. And it's opening at the Quad Cinema in Manhattan on September 9th for a one-week run. I look back with gratitude on my experience with Gotham and Michael. I invite all Gotham folks to come out to the screening. All the info is available on the website address below.