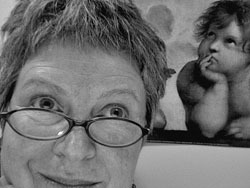 I started screenwriting four years ago when I had a three-month sabbatical from Vassar.  I took a couple of screenwriting classes at Gotham including the one-day workshop, the introductory 10-week class, and a film analysis class.  I wrote my first screenplay, Staying Afloat, through that class, which got picked up by a producer and shopped around for a year, but ultimately never went anywhere.  My second screenplay, The Escape Artist, won the Final Draft Big Break competition which included $10,000 and a trip to Hollywood.

Since winning the contest, The Escape Artist has been optioned by a British director-but that's all I'm allowed to say at this point.  I finished a third screenplay, The Border, and there is a lot of interest in that script.  And finally, as a result of a chain of connections from the contest, I had the opportunity to rewrite a screenplay written by another writer, and actually get paid for it!