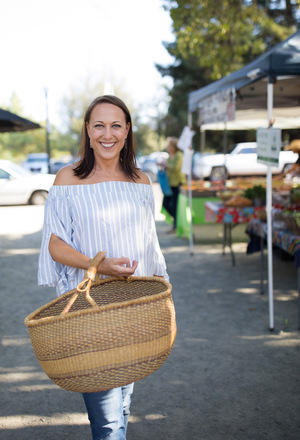 I’ve been a professional writer for over twenty years now, and it is, in large part, because of you.

Remember almost 25 years ago, when I’d trek across Manhattan on blustery November nights for that Travel Writing class? Well just a couple of years later my first article was published in Hemispheres Magazine, and dozens more soon followed.

Over time, life happened. Travel writing morphed into food writing. I found faith (or it found me … kicking and screaming). I migrated from New York to California and married a man I’m even more in love with today (22 years later). And I battled—and overcame—two life-threatening illnesses, which launched me on a quest to answer the question: “What do I need to do to nourish myself?” and ended up changing my life.

When I began to feel the urge to write about it all in long form rather than bits and pieces for articles, I felt I needed help. I’d written for so many magazines and companies for so long that I couldn’t really hear my own voice any more. So I sought you out. Only this time, it was a long-distance relationship with the online Memoir II class taught by David Seigerman.

One of the boundaries I knew I wanted to push was talking about my faith for the first time. I’d come to Christianity during my time in New York in a roundabout way and had kept it hidden from my secular “career world.” I was worried people would be put off just by association with the “J word.” But David and the class made me feel safe. That precious space they held allowed me to press into the vulnerable places without fearing I’d offend, and to experiment with language in an effort to capture experiences that were beyond words.

Through his instruction and detailed notes, David not only sharpened my craft, but gave me the incredible gift of placing value on the way I saw the world. Instead of being embarrassed by my unusual observations and phrases that people used to tease me for, I began to treasure them as unique expressions of …me.

I came out of the class with three strong chapters and an outline for a memoir called Drive, Baby, Drive, of a seven-month road trip that my husband and I had taken from San Francisco to Costa Rica and back shortly after my double-whammy health crises. A few months later, I hired David to review my final proposal before submitting to an agent.

The agent was very encouraging of my writing, but said she wanted more. Why did we take the radical act of just pulling up stakes? What did faith have to do with it? And how did real food heal not just my body…but my whole being?

So over the next two years my agent helped me pry open the timeline of Drive, Baby, Drive to cover two decades of my life, which became Nourished: A Memoir of Food, Faith and Enduring Love (with Recipes).

When it was done, Janet sent the proposal around—we had targeted major publishing houses with strong Christian/Spiritual divisions—and I hunkered down for the long onslaught of rejections. Instead…we had bids from five top houses within ten days.

As I sat there on conference call after conference call (because, newsflash, the publishers wanted to talk to me…at one point it occurred to me that they were wooing me), I was holding a very clear bar of the vision and encouragement that David had brought to the Memoir II course (and, very happily, my agent was diligent in helping me hold the bar).

When one editor tried to paint me into a “food” corner, I thought, “This story is about more than just food.” When another tried to sanitize my experience of faith, I had the courage to say, “That’s not the way I lived it, and it’s not the way I want to tell it.”

In the end, I landed with an incredible editor at Convergent Press (an imprint of Penguin Random House) who, like David, valued my voice—embracing my quirks and imperfections— and helped me write the book that I truly believe I was meant to write.

It was a long, long (long, long) road to my first book, and I couldn’t have done it without you. Thank you, Gotham, from the bottom of my heart.