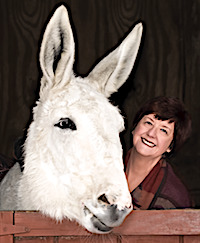 Without Gotham Writers, I never would have published my two award-winning travel memoirs, Over My Head (2012) and The Cusp of Dreadfulness (2016), or my latest, a pet memoir titled Smart Ass (2018).

Like many academics and perennial overachievers, I came to writing with the attitude of: “How hard can it be? I know how to write.” After all I’d published thirty papers in geologic journals.

With years of diaries from my misadventures working as a geologist in Chile and in Antarctica during Pinochet’s dictatorship and more recently a different kind of journey with an oversized donkey, I had plenty of material. Too much, in fact.

Thankfully I had enough sense to sign up for a One-day Nonfiction course at Gotham with Carol Bergman and then a ten-week course with Debra Emin. Lesson number one for me was that I was writing summaries, not scenes. “This happened and then that happened.” Oh. “What is a scene?”

The answer: Placing myself at the place and time of the event, observing my surroundings with all of my senses, re-creating dialogue. Wow!

An early example was something like this: “I fell overboard, but someone saw me and pulled me out after a few minutes.” A potentially heart-stopping scene recounted as if on an insurance form. It became: “The white hull of the ship flashed past as I plummeted toward the sea. Its icy teal and gray waves rose up to meet me halfway…” and so on.

Pacing, slowing down the tensest moments to real time or slower, placing myself in the scene (not as if viewed from afar!), all these things I learned and more, though it took years to really write this way naturally. Class discussions and the input from the students were invaluable.

I went on to take several more courses as Gotham: Creative Nonfiction II, Memoir I, Memoir II, and more recently Travel Writing, Mystery Writing, and two courses in Social Media. I especially want to thank Sarah Saffian, a superb writer and editor, who suffered through my premature attempts to edit what was only one or two steps beyond an unwieldy pile of field trip notes, stories, and letters to create the first draft of my first book.

Encouragement in classes kept me going. Whenever I was stuck, I asked for help, and it was always there. Not coddling. Real help. Too many workshops I have tried elsewhere (only because they were closer to where I live) just give out praise, which is wonderful when we are first putting words on a page. But, Gotham instructors, from day one, treated us as WRITERS, not first graders. Friendships formed in class led to years long writing partnerships.

I’ve recommended Gotham to dozens of people and will continue to sing your praises forever.