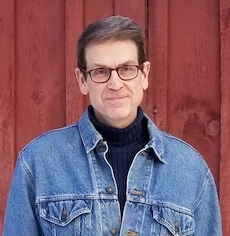 “Do you think you could have written your memoir at a different point in your life—say ten or fifteen years earlier? And if so, how would it have been different?”

When someone typed this question into the Q&A at my first-ever virtual book event in April of this year, I had to think hard. What was happening in my life in the fall of 2014, when I wrote the first pages of what would eventually become Men I’ve Never Been? First, I was reading a lot of memoir then, marveling at how writers like Mary Karr, Tobias Wolff, and Jeannette Walls took periods of their lives and wove them into deeply relatable stories with rich literary elements, layering, and a strong sense of unity. Second, I was unemployed—thus all the time I had to read memoir—and just depressed enough about it to feel like I had nothing to lose. Why not write memoir, put it all out there?

And third, I found Gotham.

Gotham had been recommended to me by just about every writer I knew in New York when I asked where I might find a memoir workshop that didn’t involve getting an MFA. There were three instructors teaching Memoir I that fall, so I checked out what they’d written. When I read Domenica Ruta’s both haunting and hilarious memoir With or Without You, I knew she was the guide I needed on my journey. “Now there’s someone who will get the working class, addicted-parent world I came from,” I thought. And she did. And so it began.

At first, I wrote Booth submissions about being bullied as a “sissy boy” and as a gay adolescent. I also wrote about how my father, before I even started school, used to bring me into bars to perform reading and math tricks so that he could win free drinks from his buddies. (I loved it.) Domenica and my classmates kindly said the scenes were poignant and darkly funny, but I had no idea where I was going with it all. Then I signed up for Memoir II with Kelly Caldwell—which was so good I took it three times. Kelly’s two most memorable pieces of advice: 1) Slow down and bring the reader into the scene. 2) Find the “so what?” of your story.

I spent the next three years writing more scenes, hearing Kelly’s voice in my head reminding me to slow downand looking for the “so what.” Working my manuscript like a Rubik’s Cube, I eventually figured out that the common thread weaving all my old Booth submissions and anecdotes together was masculinity—my own, my father’s, the images I saw on television—and how trying to live up to its impossible standards can cost us authentic relationship, both with other people and with ourselves.

Once I found the arc of my story, I finished a first draft, and then a second. Then I played around with about 100 titles, queried about 60 agents, and finally found one. She pitched about 30 editors until I finally had a contract with University of Wisconsin Press, which published Men I’ve Never Beenas part of its Living Out LGBTQ+ memoir series in the spring of 2021.

I remember asking Domenica on our way out of a Memoir I session one night if it felt strange to meet people who had read your story, if she felt exposed or embarrassed having shared so much of herself in the pages of a book. She said it was just the opposite—that putting a memoir out into the world connects you to people in a way nothing else does, and that has been my experience, too. Both strangers and people I’ve known for years—even if they’re not gay or didn’t have an alcoholic parent or weren’t subject to the pressures of toxic masculinity—tell me about aspects of the book they relate to. They share their own stories of feeling the pressure to be someone you’re not, or of silencing your voice to get along in the world, or of keeping up a false front just to get through the day.

A month after my memoir came out, bookauthority.org named it one of the “100 Best Gay and Lesbian Books of All Time.” But the real reward has been knowing that I created something that helped at least a few people feel a little less isolated, a little less like they were the only ones who’d ever thought or felt something the book put into words for them. Could I have done that at a different time in my life? Maybe, maybe not. But because of how it all began at Gotham in 2014, I’m glad I did it precisely when I did.