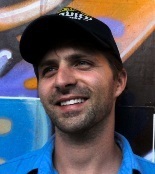 In 2007, struck by some rare surge of boldness that I only wish could more consistently be summoned at will, I signed up for a Gotham Article Writing I course. Never had I written anything seriously. Not since high school had I studied writing in any capacity. Of course I realized all this too late. I was already there, at the first class, sitting around a table with all these real writers, waiting for the class and the shame to begin, for them to expose me as a complete novice. I was terrified, almost called it quits and left. But then boldness somehow struck twice and I stayed. And thank the gods I did.

Cliff Hopkinson was the instructor for that Article Writing course. An incredibly knowledgeable and experienced writer, Cliff taught me enough in ten classes to help land me a freelance gig with a community newspaper when I moved to California. And even then, well after the completion of our course, Cliff continued to see himself as my instructor, even taking time to edit articles over the phone from New York.

Autumn of 2012, I took Fiction II with Hasanthika Sirisena, and these were likely the most formative months of my writing life. While certainly encouraging, Hasie also challenged me to develop my writing. Offering invaluable advice and precise instruction in craft, Hasie was a truly exceptional teacher. Ultimately it was my time with her that convinced me to apply for an MFA in creative writing.

And most recently I wrapped up a second Fiction II course with Thais Miller, another absolutely stellar instructor. Not only were Thais’s classes well-structured and professional, but her enthusiasm for writing made it impossible not to be excited yourself. She so obviously wanted us to succeed, was really rooting for her students, and still is. Like Cliff and Hasie, Thais continues to act as a kind of writing mentor, offering encouragement and advice.

This past spring I was accepted into the MFA program for creative writing at Rutgers-Newark. Pretty soon I will be doing nothing but writing. For. Two. Whole. Years. This realization often stops me in my tracks, makes me feel like I’ve won the lottery. But my real luck has been coming through the doors at Gotham, not just once but three times. Cliff, Hasie, and Thais. What did I ever do to deserve such good fortune?!

So, my many, many thanks to everybody at Gotham. Without you I can confidently say that I wouldn't be able to consider myself a writer today. To my instructors and fellow students and all the lovely people behind the scenes (Dana!) who helped things along, I owe you so very much!