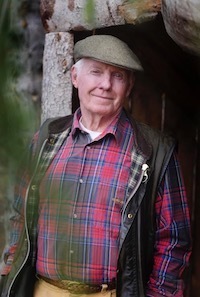 Adventure is my lifestyle. I was sixty when I met my present wife in a Norwegian mountain hut. I proposed under blooming cherry trees in Central Park, NY, and we married on a remote island in the North Atlantic. It is all in my book Lycka är ett Sommarskepp (A Summership is Happiness).

You keep a logbook when sailing in order to know your position. During long watches on the North Sea, I began journaling and dreaming about writing a book. I had read lots of sailing stories from Homer's Ulysses to Bill Tillman’s many adventure tales. Did I dare to write my own? Yes. I took a course in Travel Writing with Gotham Writers during the next winter.

I translated some chapters into Swedish. When published in local sailing magazines, I got a contract with Sweden’s second largest publisher: Norstedts. I wanted to improve my writing a few years later and continued with Gotham's Memoir I and II, then got my second travelogue published: Blå Sommar och Röda Segel (Blue Summer and Red Sails).

After fifteen years of sailing, we decided to leave cold waters and sold the boat. We were in our early seventies and sat in a suburb of Stockholm looking to a bay of the Baltic Sea. I wondered if sailing expeditions were our last adventures.

You meet adventures outside your comfort zone. So, my wife suggested we return to the mountains and to the hiking and skiing of fifteen years ago. I loved her suggestion and within a year we had moved to Åre, Sweden's Aspen. Our children and grandchildren thought we were crazy, but the new adventure of living fulltime in the mountains was more attractive and won over their objections.

Writing is an intellectual adventure and I wanted to write about Åre's secrets. 2019 Alpine World Championships in Åre provided an opportunity, so without consulting Gotham Writers, I wrote a coffee table book: Åre Masters, Mountains and Magicians. It is in English, to be read by Åre’s international visitors. www.aremasters.com

Sweden has a tradition of mystery writing, and a publisher in Stockholm wanted mystery novels based in Åre. He heard about my book Åre Masters and suggested that I write mystery stories based near my new village home. After a year of reading modern detective stories, I dared try. This time I returned to Gotham Writers and took the course in Mystery Writing. I translated my assignments into Swedish and the publisher and I signed a contract. Today, two good-selling cozy mysteries have been released, Red Snow and White Death. www.aredeckaren.se

During this gloomy Covid 19 spring, I had lunch with two sad, depressed contemporaries. Afterwards I decided to write an optimistic book on growing old and reaching wisdom and vitality; I want to inspire the next generation and fight negative ageism. The target group is readers between 40 and 60 and the tentative title is A Guide to Becoming Happy and Healthy when 70. It will have essays on happiness, health, and aging, and book reviews and interviews with celebs over 70 who identify themselves as lucky and healthy. I have never written professional essays, though I am a long-term New Yorker subscriber and have written the Åre Masters nonfiction book.

My solution was to attend the Gotham course Essay & Opinion. As with all Gotham classes, I am very satisfied. After each Gotham program, I have published two books in the area studied. This book will take a year to write and I will turn 80 before it is published.

Now I ask myself, “Will there be another book on aging after this one or will I write cozy mysteries, happy and healthy in my comfort zone with my wife and dogs?” I know the next mystery titles: Green Graves then Blue Blood.

Or will I write haikus?