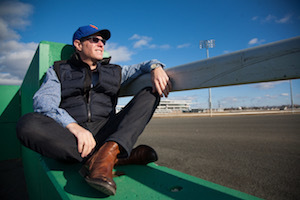 Five years ago, I was forced to find a new vocation. As a 47-year-old single dad, anchored in Manhattan by my two kids and my family’s business, I had finally reached a solid level of success training racehorses in the sport of harness racing (a form of horse racing), something that had been a goal of mine (for whatever reason) ever since I had fallen in love with the sport as a child. But The Meadowlands, the only place anywhere near NYC where you could train a racehorse (where I kept all my horses and raced most of them), closed its barn area. So I reluctantly said goodbye to horse racing, having achieved the high of training a couple champions. I still love horses, have a few here and there, and I enjoy driving them in races occasionally.

But take away someone’s passion, and you’re taking away a primary reason for them to get out of bed in the morning. Fortuitously, I met my bride-to-be at that time, and so I did have one big reason to wake up, but I still needed a place to put the energy I had previously dedicated to racing. My search for such a place led me to a Gotham One-day Songwriting class.

That course has led me on an adventure that continues to this day.

I had barely picked up a guitar or written a song previously. The course was taught by Tony Conniff and lasted seven hours that flew by. It was a whirlwind experience—a complete tour of songwriting and the music business. Although I didn’t necessarily come out of that particular session ready to write a hit song, it got me going on a few songs and it convinced me that it was worth going to a second similar class that November. The experience that time was even more compelling, as several prominent and well-published songwriters were on hand.

I came out of that class with the heady feeling of “I think I can actually do this.” If you’ve ever wondered with bafflement how anyone puts a song together, one of these classes will have you realizing that it’s just something that’s built, piece by piece, and that realization is empowering—a real relief that those pieces can indeed be put together, and that one’s creativity will then have its own little workshop to play around in. As an additional bonus, Tony took the time to explain how to use Garage Band, a great piece of software that makes writing songs a far easier process, from a purely technical perspective, than it ever has been in human history.

I got to work. I wrote a bunch of songs on my own—doing my best to play the guitar, and to use the other instruments Garage Band offered. I improved little by little. I got one song pretty well polished off, to the point where I’d listen to it three times in a row and think, with a joyous disbelief, “I did that?”

A couple years later, I realized I was at the point where I needed a producer, so naturally I reached out to Tony Conniff from Gotham, who turned out to be a great producer as well, and we put together a completed album at his studio. I am starting a second, and am about to perform my second gig at The Bitter End. The first one went, by all accounts, quite successfully and I can't wait for the next one. It’s the same anticipation I used to feel when looking forward to one of my horses’ races.

There is a lot of randomness involved in music being commercially viable, and hopefully if you’re interested in music, it’s not for the money. The possession of a skill like songwriting is its own reward. I’m writing songs that I love and care about—they’ve become definers of my world. I never thought I could find a passion to replace my love of horse racing, but I have, and it would not have happened if I hadn’t happened upon the Gotham kiosk that February over five years ago.

If you’ve ever considered making music a part of your life, and think you have something worth expressing in song, I can’t recommend Gotham’s programs more highly.