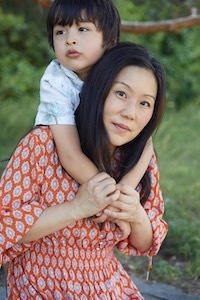 Originally from New York, I moved to Switzerland to be with my husband. Living overseas, I really missed the creative community I had created for myself back home (including a Gotham instructor I met in a live class. Hello, Tony Conniff!). I craved inspirational input. Also, what I have learned about myself is that I don’t do very well without the pressure of a deadline, structure, and community. I’ve tried.

Three years ago, I signed up for my first Memoir class with Elizabeth Cohen. Since then, I’ve lost count of how many classes I have taken, but I think I have done each level at least twice, possibly three times. Last year, when the pandemic hit Europe, I felt too distracted to focus on my book.

“I’m sorry but my head really isn’t in 1950s Pyongyang right now,” I wrote. Instead, I submitted a piece on my fears of sending my kids back to school.

“This is good. Look at my comments and try sending it out,” Elizabeth suggested. So I did. I reached out to a few parenting blogs and on a whim, I also sent it to the New York Times. Why not, I thought? I didn’t hear back until a few months later when I woke up to an email from an editor at the NY Times. They wanted to publish my piece. The only caveat was that I would need to do a rewrite as it was now outdated.

“Help, I don’t know what I’m doing!” I wrote to Elizabeth.

“You’ve got this,” she assured me. I was daunted but I rewrote it. The blue boxes of editing questions and comments I got back from the editor on my rewrite felt familiar, almost like the instructor comments on a Booth submission. It was finally published last August as a three-part series on schools reopening around the world.

About four months later, I submitted another essay to the Booth in a class taught by Emily Rapp Black. It was a rough draft about my experience as a Korean-American growing up in the States.

I reviewed the instructor and class comments and filed them away. Shortly thereafter, I started seeing articles about the rise of anti-Asian hate crimes filling my Asian American newsfeed and felt compelled to write about it. I revamped my essay. This time I was back in a class with Elizabeth Cohen, so I sent it to her.

“You’re on to something,” she answered, “but this needs to go out ASAP. It is not an evergreen.”

I submitted it to the Los Angeles Times and within two days, I received an email from the Op-Ed editor saying they were interested. It went in the paper two days later:

A day after it went to print, I received another email from the LA Times editor. They wanted to put my essay on their newswire, and so my essay on the Rise of Anti-Asian hate crimes also appeared in the Chicago Tribune as well as a number of local papers across the country. People I have yet to meet were posting my article to their Facebook pages and I started receiving touching messages from folk who had read it and wanted to reach out to me. As a newly published writer, this outpouring of support has been quite an emotional experience.

Throughout this, my Gotham Writers classmates continue to encourage and cheer me on. I am so grateful for the instructors and the supportive community of writers I have met here on my writing journey and am particularly indebted to Elizabeth Cohen. She seems to know just when we need encouragement and will tell us what we need to make our writing stronger. (Cut. I know you can come up with a better word. You’re mixing tenses here!).

I don’t plan on stopping and have already signed up for my next course. Why stop a good thing? Looking forward to seeing some of you in the Blackboard area!