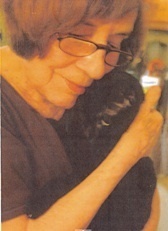 The Inspiration: This annual contest celebrates longtime Gotham student and writer Norma Crosier who died a few days short of her 91st birthday.

The Challenge: Tell a story from your life in 91 words or fewer.

Here we present the winner and the finalists:


I Called Him Dad
I was 8 when we met, and I didn’t like him. He smelled like dust and wore a leather jacket. But then he kneeled, snuck a Hershey’s kiss, and whispered, “Don’t tell your mother.” I was 20 when he showed up at my apartment. It was July, and I’d eaten only Spearmint gum for sixteen days. He took me in his arms, the leather cold against my chin, and drove me fifty miles to the treatment center. He was waiting in the snow when I got out, Hershey’s kiss in hand.

Flames
Triangles of blue fire rolled across the sky like gems along a bracelet. I watched from an attic room overlooking an orchard where the horses stood, asleep. My sister sighed beside me. Too often she lay awake because of my stories of ghosts, monsters, half­wolves trolling the woods. I’d spent most of my nine years in trouble for storytelling, but now, here was something truly magical, real, unlike anything I’d ever seen, likely comets or UFOs. Who knew? I watched them burn holes in the sky and let my sister sleep.

Corner of Wesley and Irenhyl Ave., 1972
Forty years after Louie, I stood on the corner near my childhood home, where the white fence leaned, honeysuckle climbed up in yellow braids, and grass glowed green in a kaleidoscope of shifting patterns. Louie was eleven, a baseball player with a posse. One approached me. “Hey, can Louie kiss you?” I was fourteen. I thought, how precious. The kiss was quick, like a bee sting. Louie’s friends cheered like he’d hit a homerun. By summer he was dead, the leukemia swift. I was his first kiss; he, my sweetest.

Young American
We snake past mounds of third­world burlap sacks—the pregnant chaos of JFK immigration. My tiny red suitcase holds a 10­year­old's necessities. It's 1973. A Pan Am flight has delivered us from Stockholm. Thrust into New York City humidity, we rush to the next terminal, the next flight. Rolf awaits in Baltimore. The new stepfather. A man mom hitched after a two­week fling. His Chevy van with two bucket seats up front, a foam mattress in back for me—the third wheel on this trip. No safety belts available.

Blair and the Bonneville
Out of all the girls standing there, I was the one he smiled at, flicking his head to invite me aboard. I felt the engine’s strokes reverberating from the soles of my bare feet to the crown of my hippie head, touching all the sweet spots in between. Triumph 650 Bonneville. Sexiest machine ever. Va­va­vrooooooom. That summer was a delicious blur. Forget the boy; I was deeply in love with a machine that transported me physically and emotionally to wherever I wanted to go. No sex was necessary; just that bike.

Dance Lesson
My husband fills the room with the voice of Celia Cruz. His hands held in a cuddle. His hips move to the left then to the right. But the pelvic nuances were left in Cuba—1959. I, however, know how much he wants to catch the beat. Now I teach him, once again, to dance.

Dance
I inherited one of my mother’s most notable features: green eyes. On this day, her eyes brighten as I share my plans to attend a dance in DC with friends. She is elated. I: her 39 year old daughter, having recently left the convent after 20 years. She: a devout Catholic but hopelessly romantic. My leave­taking promises cozy conversations about potential dating prospects. She probes: “When?” “Friday night.” “What kind of dance?” “It’s for women. All women.” Our green eyes lock. Arctic pause. “It’s good your father’s dead.”

The Savior
I stepped, resigned to my duty, into my bedroom for the tenth time that hour. I flicked the light switch on. Then off. Then on. Then off. Then on. A sine wave of anxiety accompanied these motions, spiking on the fourth flick. Four was a bad number. I hated this ritual, but I was saving my family from terrible things—bloody deaths, heart attacks, car accidents. I was saving myself from guilt if anything did happen. A bottle, untouched for two weeks, stood guard on the nightstand, saving my OCD medication.

Geography Lessons
In a classroom full of mosquitoes, I envisioned America with statues of Washington at the entrance of grand bazaars, bathhouses, and hookah lounges. We stared at the map many times, but no one explained the peculiarities of the landscape. I wondered if low flying jets rattled windows and blew crumpled newspapers on makeshift backgammon boards. Did idle men snap at their wives? I knew Lebanon trumped Delaware in size, but who fed the skeletal cat by the mosque? Where did they bury the child, while jumping rope, she overlooked a landmine?

Proof My Mom Didn’t Love Me
Bounding down the stairs two at a time, I rounded the dark basement corner. The wet, musty smell hit me first, followed by thick, paralyzing darkness. I prayed. Made bargains with God. Tried not to cry. I thought about our cat, who cleverly avoided the basement. I had seen her down there, back arched, hissing and scratching at unseen demons, the hair on her back electric. Chilled through, I made a brave dash for the pantry, across the dead furniture cemetery, and dove for the Kerr jar full of beans. Success!

The Groper
Men searched out his company and women idolised him. When he thought no familial eyes were watching, he would soft­pinch every superbly rounded female buttock that dared to stray within arm’s reach, knowing full well that a voluptuous smile would adorn the lady’s pretty face when she turns her head. Then, unable to speak, with plastic tubes protruding from his nose and arms, feeding cancer­ridden lungs with oxygen and dosing morphine to mask the excruciating pain, the shapely form of the nurse at his bedside went completely unnoticed. À bientôt, Dad.

Murder on Sunday
Granny flipped her wrist a couple times, then with a swift lasso snap, wrung the chicken’s head clean off. I was five years old, witnessing something so terrible I couldn’t look away: a decapitated bird body running round our yard till finally tipping over dead. Would Granny’s next trick be to stick the head back on and resurrect the murder victim? Instead, like snatching up two purse handles, she hauled away the poor thing by its feet. This would be Sunday dinner, and Granny was known for her fried chicken.