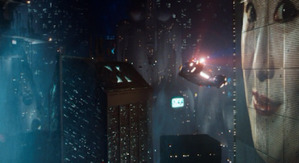 George Orwell picked the year for his novel 1984 by inverting the last two numbers of the then-current year, 1948. We did the same here for 2017, and asked you to imagine writing a novel set in 2071.

Paranoia is in the air these days, and that took some of you in a dystopian direction. But that wasn't the only way. You could've hinted at near-future technology, ecology, housing, food, fashion, pop culture, or something else. And your line didn't have to make it obvious we were in the future, though it should've be inspired by the time period.

Whoever wrote the first line that most intrigued us about their near-future received a free Gotham class of his or her choosing. (Entries could actually consist of more than one sentence, but there was a limit of 27 words.)

Here we present the winner and seven finalists:

In a world of atypical minds, the slur that starts with N is the word "neurotypical." Or if you want to get really nasty about it, "normal."

The traffic lights had hung for a long time as little museums of dead lightbulbs before the boys arrived with slingshots to shoot at them for sport.

One of the oddest things about the program is holding a baby clone of yourself.

My mother once told me that when she was little you could go places and no one would know where you were. It must have been awful.

"Orange, black and white. Unlike dinosaurs, we do have photo evidence of tigers."
"And polar bears...white?"
"Yes, Margot," the instructor smiled sadly. "As was their habitat."

It wasn't that hard to fly a spaceship. Just like riding a bike, Kai thought, wondering what a bike was and where that saying had come from.

I wake up at the same time I always do: when the coroner flips the tag knotted around my big toe. Can't help it. The string tickles.