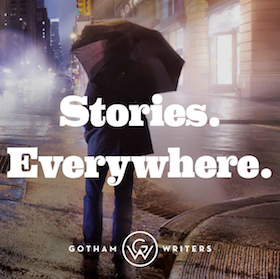 Each month we invite you to post a story on Twitter using #GWstorieseverywhere for a chance to win a free class. Your story must be no longer than 25 words, with a max of 280 characters, including spaces and the hashtag #GWstorieseverywhere. Your stories (which can be true or made up) will be inspired by what you see, know, or do, and they should relate in some way to these monthly "themes":

For more tips on crafting a winning entry, read this helpful guide.

Our winner for August's theme Daring move:
Family dinner. All the aunties and uncles come. Mom's acceptable topics of conversation exhausted, Mike can bear it no more. He cracks a political joke. @igrewupinnarnia

Our winner for July's theme In the attic:
Duffle bag shrouded by cobwebs, stuffed with videos - Romeo and Juliet, Venus and Adonis, Taming of the Shrew. Never knew hubby liked Shakespeare. @LeonaCross15

Our winner for June's theme Prayer:
I always bowed at the door in the morning. Grandpa expected perfection in ritualistic pursuit, so I followed his words, even after death. @TheBorkLord

Our winner for May's theme Otherworldly:
Lee went off to college. We stayed behind. Years later he returned, showcasing his diploma, dapper suit and high-flying career. Our very own alien landing. @brieflywrite

Our winner for April's theme Rejuvenation:
In the hall closet, I find my Yankees cap mysteriously filled with sprouting daffodil bulbs. I add soil, water and order a new cap. @LuciannePoole

Our winner for February's theme The state you're in:
We met in Michigan, two maelstroms dancing. Florida was a badly sealed pressure pot. By Alaska, it was over. Like an ice calf, she drifted. @gloriamundii

Our winner for January's theme Let it go:
He always needed to have the last word, so we buried him with a hammer and chisel beneath a blank stone. @ZVSaratoga

Our winner for December's theme Overstayed welcome:
Our crusty professor clutched the lectern with dead-knuckle hands. “For the final,” he guffed, “gimme a thirty page sequel titled Waiting for Godot to Leave.” @ZVSaratoga

Our winner for September's theme Unfamiliar:
He handed us a bottle with unfamiliar writing (cyrillic?) and disappeared into the desert night. Army never found out. So much for a dry country. @DosPassosII

Our winner for August's theme That one summer night...:
That night, we were delayed, diverted and deposited in New York. Motorbikes spat out hate. Theaters closed. The final scene cut. It was almost us. @annettejwick

Our winner for July's theme Shenanigans:
He got the biggest kick out of saying, "here comes Shannon-again," whenever I'd show up, until I cut the brake lines on his car. @ZVSaratoga


Our winner for June's theme Stolen:
The day I took his Mickey Mouse watch, I hid it in a church pew. 18 years ago. He doesn't even remember - but I do. @ThoughtzDumb

Our winner for May's theme Emergency:
"Hurry!" she cried. I hurried. Zipped in and out of traffic. Horns blared. Baby couldn't wait. He arrived at 7th and Broadway. A born showman. @tracydavidson27

Our winner for April's theme Duped:
Her crimson skirt enveloped my sight. She twirled around me once. I lost her before I sensed my empty pocket. Flamenco is not free. @ashrgoff

Our winner for February's theme First encounter:
Several pence clinked down onto the pavement from my unzipped wallet. “You’re hemorrhaging coins!” exclaimed the American stranger. He paid for every meal together. @m_ordv

Our winner for January's theme Slippery slope:
A chain reaction sparked by spontaneity under the cloak of traveling alone, I started smoking again. Worse things have happened in Vietnam. @melodyjmoulton

Our winner for December's theme Photo album:
The album’s tattered leather binding is not as worn as the shoes depicted therein, from days spent herding sheep and delivering milk. @m_ordv


Our winner for November's theme Unpleasant relative:
Uncle Leonard smacks his prodigious lips and flings saliva while chewing. A wooden chair creaks beneath his massive hindquarters. He didn't even wash his hooves. @natty__walker


Our winner for October's theme Skeletons in the closet:
Ribbon lighting, gliding shoe shelves and mahogany paneling inlaid with his skull. She always said she’d kill for a custom closet, but he never listened. @ThatCatKelly

Our winner for September's theme Epiphany:
I used to want a pony. Now all I desire is a different timeline with advanced space programs and science education. @helsinkian


Our winner for August's theme Hot Date:
Coffee meets bagel. Sugar cubes melt in the tall dark cup of French roast as cream cheese melts between the curves of the poppyseed beauty. @kate_scarpetta


Our winner for July's theme Dear teenage self:
Parents mostly toss around figures of speech to sound clever. "Don't play with matches" is not a figure of speech. And eyebrows grow back. @ZVSaratoga

Our winner for June's theme Pandemonium:
The radio crackles. A tinny voice gives the address. Sirens on. We’re howling, flashing through traffic. Nobody saw the motorbike. Suddenly, we’re the crime scene. @alexandra_km

Our winner for May's theme Moving in:
“How’s the paint?” he asked, admiring their brand new walls. “Beautiful,” she gushed, thinking they’d be more beautiful if they weren’t closing in on her. @herpenname

Our winner for April's theme White lie:
The first time she missed her confirmation she told the nuns she'd overslept. The second time she told them she had morning sickness. @Flirtyburtie1


Our winner for March's theme 4 AM:
I slip out of bed at the beep of the coffee machine. Mama works a double today, and I won't get another kiss until midnight. @The_Great_Y

Our winner for February's theme Stupid Cupid:
His pickup line: "You're short. Can I measure your feet?" Thirty-five years of marriage later and he still hasn't gotten around to it. @bjgreville

Our winner for January's theme Something lost:
The first twinkling light in the evening sky appeared. The boy waved his flashlight back and forth in acknowledgment. “I miss you too, Daddy.” @banjopickindoc

Our winner for December's theme Nightmare:
Ana races along the desolate shoreline. Crashing waves muffle her screams. The ocean is vast, and her boy is but a speck. @LLMadridWriter

Our winner for November's theme The invitation:
Stained, greasy envelope, half a stamp left. Moments of time travel. I was invited to my grandparents’ wedding in 1937. @helsinkian

Our winner for October's theme Risk:
Behind the wall they hid a secret that could get them both killed: a Jewish boy of six who I would one day call Grandpa @N_Kay123

Our winner for September's theme Biggest fear:
Fame achieved by dying stupidly: "Sadly, she choked to death on a tiny live fish." @caligretchen


Our winner for August's theme The last straw:
She lost her shoe, her virginity, and her driver’s license. Thank God she didn’t lose the address of the AA meeting. @JSouthDunn

Our winner for July's theme First kiss:
She gave it her all, but the Leonardo DiCaprio poster just refused to kiss back. @kelseyskennedy

Our winner for June's them Serendipity:
He was scanning Missed Connections to find the girl from the Q train, when he tripped and spilled coffee all over her. @VOFranzese

Our winner for May's theme Sunday:
I missed a plane one Sunday afternoon. It crashed into the sea midflight. Always punctual, you boarded early. @bonbon7

Our winner for April's theme Voyeur:
As a little girl I'd walk my street looking in lit windows. I'd watch families gathered at the table and I'd pretend. @meyouandthesea

Our winner for March's theme Broken promise:
Gwen plays with her 30 day sober coin, tosses it up, and downs her tequila shot; heads or tails, either way she's lost. @shadowprancer

Our winner for February's theme An old flame:
A love letter, the last one you wrote me. I rip it into bite-size pieces and chew, to have you inside me again. @lita_bush

Our winner for January's theme Starting over:
This time it will be different, He said. First, no damn snakes. Then, instead of luscious apples, brussels sprouts. @jlhuff_huff


Our winner for December's theme Gift gone wrong:
On the first day, it made mewling noises and came with a pretty red ribbon. On the second day, it learned to open doors. @skofri


Our winner for November's theme Breakup:
I left a note in the cookie jar. It included instructions for landing the spaceship. She'll find it eventually. @laurentmatson


Our winner for October's theme An amazing sight:
Dramatic clouds, I like to call them. Never blue, never red, but plain old greys dancing out my father's mouth. @Anyato__

Our winner for September's theme What happened in school today:
He learned to forget everything, so he could stay at school forever. @juanvassallo

Our winner for August's theme Vacation gone awry:
Lost his luggage. Filled out the wrong paperwork. Became a refugee. @carladgray

Our winner for July's theme A revolutionary act:

I ate the last cookie. In the closet. Because I wanted to hear myself chew. @krisdkeith

Our winner for June's theme Superhero:
My hero wasn't in the news in a cape. Instead, he lay beind a sterile glass box. Breathing, fighting, two days old. Mine. @JessWinn26


Our winner for May's theme Saying goodbye:
He caught their baby's last breath in a jar & under a full moon, watched the tide take it out to sea. @imruthwalker

Our winner for April's theme It happened in the shadows:
She stares at her tall,grownup shadow. Someday she will be more, she thinks to her little self. She tiptoes,trying heels. @millicent71


Our winner for March's theme Surprising encounter:
His sign read "Stranded. Spaceship broken." I pressed a dollar in his hand & said: "My brother's spaceship's broken too." @carolhillson


Our winner for February's theme Romance gone wrong:
Riding a wave of passion, it was suddenly inside me, filling me, completing me. Definitely worth the extra 1.80 for guac. @jordynrsmith

Our winner for January's theme Ticking clock:
5 losses, and #6 starts with bleeding and bed rest. Fear never leaves, but dissipates slightly in a flutter of tiny kicks @MClareWright

Our winner for December's theme Frantic shopping:
Victorious after tackling and slapping a woman for a tv, she drives home lamenting the lack of Christ in Christmas. @dahldahl

Our winner for November's theme Strange relatives:
That Thanksgiving I was 10 with a broken arm & Uncle Al was between wives. Sympathy over pie: "Broke mine during S-E-X." @GracieBingham


Our winner for October's theme Monster:
I track the muddy footprints from the cemetery to my front door. It seems my wife still knows the way home. @kristispin


Our winner for September’s theme What happened in school today?:
I had to write “I must not be vociferous” on the blackboard 50 times. I stopped at 10. @JKsSnazzyPants

Our winner for August's theme A dog's life:
We spend Sundays at the park, not because I need the exercise, but because he still thinks men meet women this way. @GMargaritax

Our winner for May theme A dangerous turn:
Had I gone right I'd have picked up my dry cleaning and gone home to Indian takeout. I went left and found his knife. @Vale1217

Our winner for April theme Encounter in the rain:
His $50 umbrella protects me from the pouring rain while I try to open my $5 umbrella. That's how I met Gregory Hines. @Paula65writer

Our winner for March theme Tall tale:
The excitement of learning she was taller than she thought soon deflated when she realized the extra inch was her shoes. @Pamsmanley

Our winner for February theme Through a window:
Staring straight ahead, I see his thumb raise. I reciprocate. It is the only way he knows I'm alive inside this ambulance. @Abranyc

Our winner for January theme Tough choice:
Biology textbook in her lap, she sits alone in the clinic waiting room chanting softly, "It's only an embryo, only an..." @ReneeRHD

Our winner for December theme Someone you recently met:
Ran into each other at intermission. His aftershave hit me harder than an arms race. Decided to make up our own 3rd act. @geheimsness