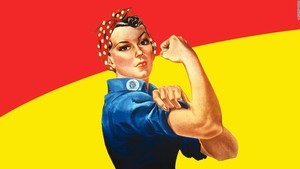 The world stands at a crossroads, with people fighting over how best to lead our countries and live our lives. The stakes are high. The drums beat loudly—especially with the November elections in the United States.

It’s a time for voices and votes.

In Star Wars: The Last Jedi, Rose Tico, a fighter in the Resistance, says, “That’s how we’re gonna win. Not fighting what we hate. Saving what we love.”

In this spirit, we invited you to write a story (in 50 words or fewer) about a person (or group) who fights to resist the forces threatening what they hold dear.

Here we present the winner and five finalists:

We sit against the counter for hours, a long row of cold butts and aching backs. I ask for a coffee, again they decline. I can feel the eyes on me. I read until closing time, but I’ll be back again tomorrow. Until my dollar is as good as theirs.

For the first time she saw the truth, and decided to love it no matter what others would say. She walked past surprised classmates with a bounce in her steps. Kate, the queen-bee and now cancer patient was learning to live without her wig and the fear of others judgment.

It was never going to be a fair fight. My sister was nine years older, twice my size, and acting on behalf of Mum and Dad. As she dragged me away from my game, I had no other option: I slipped my finger through her hoop earring and pulled.

It wasn't the flames I feared, but the ashes they'd leave behind -- sixty years' worth of carefully handwritten manuscripts. So I held the wet cloth over my nose and mouth, and sprinted back inside, ignoring the fireman's shouts.

Marc rises before dawn. He grabs the brown bag holding one bologna sandwich. He dodges darts of discouragement as he threads across railroad tracks headed for American Stove Products. Menial work outlasts the minuscule pay for a family of eight. Provider he is. A burden to society he is not.

You were hunched over in your room, loose worn pajamas sagging low, sobbing. “I just can’t do it anymore” you wailed. My young eyes didn't then understand the pain beneath your daily strength. You fought the solitary battles of single motherhood with grace, hoping we'd make it. We made it.