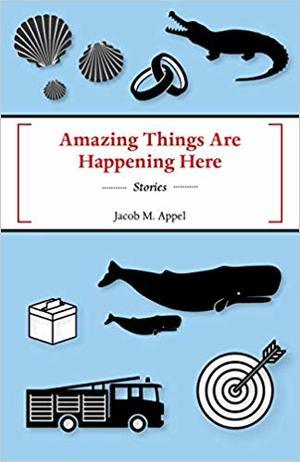 Excerpt from the title story "Amazing Things Are Happening Here."

We were short one lunatic.

I know it’s entirely out-of-bounds to refer to our patients as lunatics, and I generally don’t, but it’s also not every night that Bernadette does a headcount and comes up one head short. Fact is, it hasn’t happened before in my seventeen years as charge nurse, which is as good as never as far as I’m concerned. Sure, we’ve had agoraphobics who’ve hidden under beds, and once a detox patient dozed off inside an electric dryer, but all it takes is a careful search and we find them. There’s just not much place to lose oneself on a psych ward. When I first started here at the VA hospital in Laurenville—back when male nurses stood out like drag queens and most of our vets were straight off transports from the Gulf—doddering Miss K was the charge nurse on the graveyard shift, and she’d get the census wrong as often as not, but Bernadette is studying to be an NP, and she’s the queen of arithmetic. If she says we’re missing a nutcase, we’re missing a nutcase. Time to dispatch the paddy wagons and the giant butterfly nets—or, in the language of the Veterans’ Administration, to implement Code White.

We don’t implement Code White, of course. That’s how people get fired. A guy can have a perfect record for seventeen years—never so much as drop an order or misplace a syringe—but suddenly a patient goes AWOL, even for only a few hours, and the bigwigs in Washington will be clamoring for somebody’s scalp. Far better to let things blow over, to wait for the missing loony-tune to reappear. No point in risking your pension because some troublemaker has bested you at hide-and-seek.

“So who are we looking for?” I asked.

Bernadette displayed the palms of her enormous hands—her way of announcing that she knew little more about the business than I did. “He’ll have come in yesterday,” she said. “On the second shift. All it says in the chart is ‘uncooperative, hold over for further evaluation.’”

“Can’t be helping you there.” Bernadette adjusted the computer monitor so that I might watch as she scrolled through Dunham’s electronic admission note; none of the blanks on the template had been completed. It was already after six a.m.—nearly medication time. I ushered Bernadette into the break room where Hyacinth—the senior swing nurse—sat watching a game show and snacking on sardines.

“Dunham is missing,” I announced, “but you can’t tell anyone.”

“Who the hell is Dunham?” asked Hyacinth.

“He came in yesterday, second shift,” I said. “Seems he didn’t stay long.”

Hyacinth plucked a tiny bone from her teeth. “What is that supposed to mean?”

“It means he’s missing. Unaccounted for. On the lam.”

“So what now?” interjected Bernadette.

“Now we pretend as though nothing is wrong,” I explained—hatching my plan in the moment. “There are three of us. As long as one of us is working each shift, nobody needs to know that Dunham isn’t here. He’s bound to turn up eventually.”

Hyacinth looked as though she’d swallowed a sardine stuffed with glass shards.

I nodded. “Yeah, we could. Or get canned…. Any better ideas?”

Reprinted courtesy of Black Lawrence Press
To learn more about Jacob and his book, go here.