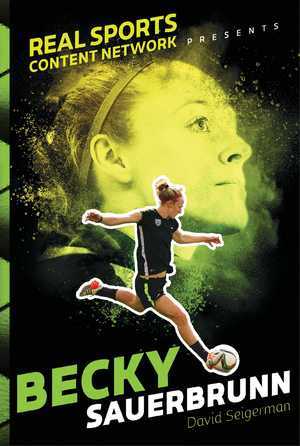 Fifty-nine minutes into the first soccer game she would ever play for the United States Women’s National Team, Becky Sauerbrunn realized something was wrong. She had just tried something she’d done on the soccer field a thousand times before – battling an opposing player for a ball loose in the air. Becky attempted to knock the ball upfield with a flick of her head. The forward from the Canadian National Team had other plans; she wanted to head the ball past Becky and in the direction of the Team USA net. It was a typical soccer moment in the middle of a typical soccer game.

Only this time, the Canadian player missed. Instead of striking the ball with her head, she accidentally headed Becky sharply and squarely in the middle of her face. And, man, did it ever hurt.

For perhaps the first time in her soccer career, Becky wasn’t sure what to do next. She had never been hurt on a soccer field before, at least not to the point of having to leave a game. During her four seasons at the University of Virginia, she missed a total of 10 minutes of game time; she probably couldn’t have given directions to the sidelines, she’d spent so little time there in college.

Should she take a knee, as players are coached to do from their earliest days spent learning to dribble a ball through a slalom course of mini orange cones spread out across a grassy patch in some neighborhood park? Should she try to get the referee’s attention, maybe to stop play long enough to get checked out? This whole situation was new to Becky, the pain and the uncertainty.

So, she did the one thing she surely knew how to do. Becky got up. She decided she needed to shake it off the pain, get back in position and get ready for the next play.

After all, this was her first taste of a dream in the process of coming true – she was playing for her country at her sport’s highest level. Years and years of practicing and playing, training and trying, working and waiting had landed her here, inside the Foshan Sports Center Stadium in Foshan, China, at the 2008 Four Nations Tournament, starting on the backline of one of the best teams in the world of women’s soccer. After everything it took to get here, she wasn’t about to walk off the field, to leave her first cap – her first international game for the USWNT – while there was still time on the clock.

Becky had gotten opportunities to play before because teammates had gotten injured. In fact, she had the rare experience of starting her first game for the National Team because one of the team’s other center backs had sprained her ankle in a training session in the days leading up to the tournament. No one gets to start their first cap. Was she really going to let a missed header knock her out of her National Team debut? And risk losing the spot she’d worked so hard to get?

Then she reached up to feel her nose. And it wasn’t exactly where it was supposed to be.

“My nose felt like it was on the wrong side of my face,” Becky said. “It was completely pushed in.”

To learn more about David Seigerman and his book, go here.