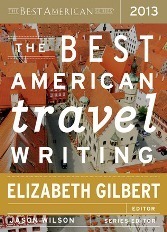 Gotham teacher Colleen Kinder’s essay “Blot Out” recently appeared in Best American Travel Writing 2013, after first appearing in Creative Nonfiction magazine. A travel writer, Colleen spent some time in Egypt, but disliked the harassment that women on the street endure, so she decided to go undercover in a niqab. It’s a rich piece of travel writing, and a suspenseful tale as well.

Here is a glimpse of the essay’s opening:

These are the ways foreign women get down the street in Cairo. These are the tricks they share, the ways they teach me to “beige out,” as one woman put it, to fog up the glasses, whenever outside. Outside is the sphere of Egyptian men. Men run markets, crowd alleys, fill every subway car but the very middle one, marked by a huddle of headscarves. Females are scarce on Cairo’s streets, and those who do appear seem hurried, like mice suddenly exposed in the middle of a room, rushing for cover.

I’m a journalist, here for just one month. The only thing I have to do inside is write about what I see outside. In short: I can’t coop myself up in Cairo. My very first day, unsure of Egypt’s codes, I played it safe and tied a silk pink scarf around my face. In the mirror, I looked like a little girl dressed up as the Virgin Mary. Covered, I felt safe but no less overwhelmed. On too many streets, mine was the lone headscarf weaving through tight teams of men. Their stony gazes felt like scorn.

I ditched the headscarf once I met American women living in Cairo. Covering my head wasn’t necessary, they laughed. People knew I wasn’t Muslim. I was obviously a Western woman, and, yes, that meant un-virginal here, and, sure, that aroused disapproval—all of which I should get over, quickly, and just focus on getting down the street.

I get down Suleiman Gohar Street by staring hard at middle distance. Sometimes, I practice the Arabic words for “left” and “right”—shmal, yamin—to the rhythm of my footfalls. And sometimes, in the blur of my peripheral vision, I catch sight of a black ghost—an Egyptian woman draped from head to toe in dark fabric—and I wonder what it’s like under there, dressed in niqab.

The niqab is a headdress that covers not just the hair, but the face, ears and neck. Paired with a long black tunic, the niqab leaves nothing exposed. A narrow, tight-threaded grille covers the eyes. The woman underneath can see out, but no one can see in.

Controversial in the West, the niqab was banned in France, seen as a means of repressing Muslim women—“a walking jail,” said one French politician. That was my first read on the niqab; I felt sorry for the women in that brutally hot costume, imagining possessive husbands and overbearing fathers. But the Western objection to the niqab presumes that being seen is a freedom women desire. After walking alone as a blonde, non-virginal, youngish woman in the streets of Africa’s most densely populated city, where almost everyone is a boy or a man, and looking, visibility is the last thing I desire. The niqab begins to tempt me like a secret passageway—a way to be outside without actually being seen. At the end of a month in Cairo, nothing sounds more liberating than erasing myself from this place.