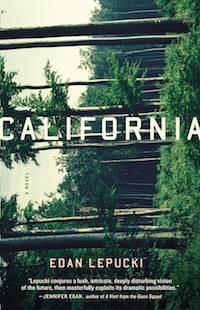 Gotham teacher Edan Lepucki recently released her novel California, which has received the kind of publicity a writer can only dream about. Stephen Colbert championed the book on his show as he took sides with book’s publisher in their dispute against Amazon, which led to all kinds of press for Edan, including this article in the New York Times. None of this should overshadow how gripping a novel it is—the story of a couple fighting to save their marriage in a post-apocalyptic world.

Here’s a peek at the opening:

On the map, their destination had been a stretch of green, as if they would be living on a golf course. No freeways nearby, or any roads, really: those had been left to rot years before. Frida had given this place a secret name, the afterlife, and on their journey, when they were forced to hide in abandoned rest stops, or when they’d filled the car with the last of their gasoline, this place had beckoned. In her mind it was a township, and Cal was the mayor. She was the mayor’s wife.

Of course it was nothing like that. The forest had not been expecting them. If anything, it had tried to throw them out, again and again. But they had stayed, perhaps even prospered. Now Frida could only laugh at the memory of herself, over two years ago: dragging a duffel bag behind her with a groan, her nails bitten to shit, her stomach roiling. Grime like she’d never imagined. Even her knees had smelled.

She thought it would be easier once they arrived; she should have known better. The work didn’t end then; if anything, it got worse, and for months the exhaustion and fear tick-ticked in her body like a dealer shuffling cards. At night, the darkness gave her a skinned-alive feeling, and she longed for her old childhood bed. For a bed, period.

She had packed some things to comfort herself: the dead Device, a matchbook from their favorite bar. Cal later called them her artifacts. In a world so disconnected from the past, her attachment to these objects had been her only strategy for remaining sane. It still was.
She tried not to take them out too often, but Cal had left the house to do some digging, and he wouldn’t be back for at least an hour. Even though the sky was gray, the sun weak, he’d worn his plaid button-down and a bandanna around his neck. They still had a bottle of sunscreen, but it had expired and was as watery as skim milk.

“Stay inside for a while,” he’d said before he left.

Frida had linked her arms around his neck. “Where would I go?”

He kissed her goodbye on the mouth, as he still did, and always would. She was thinking, already, of the artifacts tucked away in an old briefcase, shoved under one of the unused twin cots. It had been a rough morning.

Cal had latched the door behind him, and once his footsteps receded, she went right for the briefcase. From the small pile of artifacts, she picked up the abacus. She liked to pull the blue beads back and forth across the wires. She counted, she tapped, she closed her eyes. Frida had played with the abacus as a little girl and even then had depended on its calming effect. Her brother Micah, two years younger, had one as well, red beads instead of blue, but one day, when he was about seven, he cut it apart and strung the beads onto a piece of yarn. He’d presented it to their mother as a necklace.

Frida flicked at the beads. She found herself counting the days yet again. Forty-two.

Excerpted from California by Edan Lepucki. Published in July 2014 by Little, Brown and Company. Copyright © 2014 by Edan Lpeucki. All rights reserved.

To learn more about Edan and her book, go here.