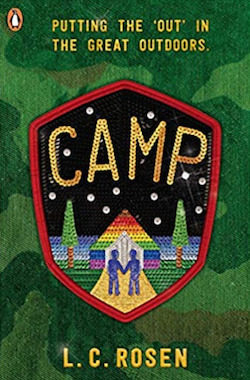 The smell wraps around me like a reunion between old friends when I step off the bus. That dark soil smell, but mixed with something lighter. Something green that immediately makes me think of leaves in rain, or trees in the wind. I love this smell. I love it every summer. It’s the smell of freedom. Not that stupid kayaking-shirtless-in-a-Viagra- commercial freedom. That’s for straight people. This is different. It’s the who-cares-if-your-wrists-are-loose freedom. The freedom from having two seniors the table over joke about something being “so gay” at lunch.

Several tables are set out next to the parking lot, a big banner hanging over them: WELCOME TO CAMP OUTLAND.

This year, I admit, it smells a little different. Maybe not quite as free. But I knew it would be like this when I came up with my plan. This smell, I hope—slightly less pine, a bit more grass, the barest whiff of daisy, which I could be imagining—this is the smell of love.

“Keep it moving, keep it moving,” Joan, the camp director, calls out to us as we step off the bus we’ve been traveling in for the last several hours, waving her hands like a traffic cop. “Tables are by age—find your age, go to that table to register.”

I look for the table that says 16 and wait in line. I run my hands over my newly shortened hair. Until two days ago, it had been chin length and wavy and super cute, if I do say so myself, but I needed to lose it for the plan to work. The line of campers moves forward and I’m at the front, staring down at Mark, the theater counselor—my counselor. I think he’s in his forties, gray at the temples, skin that’s a little too tan for a white guy, wearing the Camp Outland polo, big aviator sun- glasses, and a pin that says THEATER GAY in sparkly rainbow letters. This will be the big test. He looks up at me, and for a moment, there’s a flash, like he recognizes me, but then he squints, confused.

I smile. Not my usual big grin; I’ve been working on changing it. Now it’s more like a smirk.

“Randy?” He practically shouts it, looking me over again as he stands up. “Oh my god, what happened to you?”

“Puberty,” I say, now smiling my real smile. I look around, bring it back to smirk.

“Honey, you were a baritone last summer, this isn’t puberty,” he says. “I barely recognized you.”

Good, I think. That’s the point.

“I just thought it was time for a change,” I say.

“Were you being bullied?” he asks, concerned eyes peeking over his sunglasses.

“Well,” Mark says, sitting down. “It’s certainly new. I hope you haven’t changed so much you’re not auditioning for the show this summer, though.”

He frowns and flips through the pages on his clipboard. “Well, at least you’ll still be hanging out with us. You’re in cabin seven.” He takes a name tag label out from the back of his clipboard and writes a big R on it before I think to stop him.

He peeks up at me over the sunglasses again. “Del?”

“Okay,” he says like he doesn’t believe me, and writes it out on a new name tag sticker and hands it to me. I press it over my chest, rubbing it in, hoping it will stick.

“Well, I’m going to have to talk to my therapist about this later,” he says to himself. Then he glances at his watch and turns back to me. “Flagpole meet-up is at eleven. So, go pick a bunk and be there in twenty minutes.”

To learn more about Lev and his book, go here.