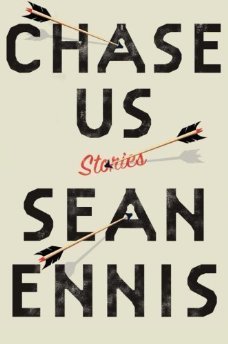 Gotham teacher Sean Ennis has recently seen the release of his short story collection Chase Us. It’s all about boys, growing up, or as Publishers Weekly says: “Ennis’s debut collection provides glimpses into the lives of a cohort of boys from the outskirts of Philadelphia, who grow older but never really grow up.” And Booklist says the author is “fearless in exploring his characters’ hidden moments of gritty truth and unease.”

Check it out. Here’s the opening of the story “This Is Pennypack”:


The August before ninth grade, Clip and I found two Indians locked in a cage. We had wandered off the path in Pennypack Park that day, bored. Fishing was useless in the creek by June, and by July, we couldn’t even heckle joggers or throw rocks at their dogs. It was too hot. August was always the worst month in Philadelphia. The sky was white with heat; the sun smeared in the humidity and smog. By then, our skateboards were cracked, and the sewers were filled with our tennis balls. Clip and I were tired of each other, too.

At this point in the summer, we hung out with each other out of obligation, out of habit. We didn’t talk much. Two weeks before, we had found a wallet while we were off the path. It was pretty much empty, but we looked at the pictures and tried a few infomercials with the one credit card that was left. It was expired. I guess we thought this sort of scavenging might be the last thing left for us to do this summer, picking up the pieces.

The farther we walked from the path, the stranger the things we found. A wallet was not strange. Maybe it was bait. Clip found a box full of cheap wooden chopsticks, hundreds of them. I found a small garden of Venus flytraps that someone had planted and then abandoned—one even opened its mouth at me. Clip found a framed picture of ballerinas; at the bottom it said, “Degas.” He smashed it against a tree. We even found a lizard whose skin was clear, and all its organs just jumping around inside it. It was like I was dreaming, and maybe around the next tree or in the next clearing, whatever I thought of might simply be conjured up.

But the cage we found was black metal, ten feet high, and the size of a small bathroom. Empty bags of potato chips and smashed liquor bottles surrounded the cage. The grass around its edges was dead. The two men inside were shirtless and sunburned. They snored. I didn’t conjure this up. Clip threw a rock that clanged against the bars, and the two men got up, growling.

The men gripped the cage and glared at us. We stared back.

“What’re your names?” Clip said finally. I wasn’t going to say anything.

The other said, “Gotta smoke?”

The wind changed, and we got a whiff of their stink—armpits and waste. No Keys started picking through the empty potato chip bags, looking for crumbs. He ignored us. But Gotta Smoke said his name again, louder this time.

“He keeps saying his name like a parrot,” he said. “Pretty bird, pretty bird.”

“I think he wants a cigarette,” I said, and then turned to the Indian. “We don’t smoke. We’re too young.”

Gotta Smoke sat back down and shut his eyes again. No Keys pissed through the bars in our direction.

To purchase the book, go here.