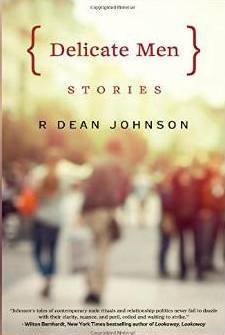 Gotham teacher R. Dean Johnson has recently seen the release of his short story collection Delicate Men. Within each story, he explores modern-day pressures and expectations that both men and boys face. Pulitzer Prize Finalist author Lee Martin calls it, “…a hard look at men caught in that land between here and there, men on the move, men on the verge of what comes next.”

Here’s a shared moment amongst men in the story “A Second Delay”:

It was fall in ways I hadn’t experienced since I was a kid—crisp air and crunchy leaves on the sidewalk. Patrick and I were out from California to visit Jim, still in the first semester of his starving artist experiment.

Jim took us to the street where all the cool kids hung out, to the Aqua Lounge, a dark chamber lit only by the fish tanks embedded in the velvet walls. It was four in the afternoon and empty except for the band setting up in the other room and the bartender, a woman with short, bleach blonde hair. “She looks like an actress,” Jim whispered, as if that somehow legitimized his moving away from us.

We sat single-file at the bar, Jim in the middle so we could grill him from both sides. “We’re buying,” I said, “now that you’re a poor college student again.”

Meg Ryan handed us each a drink menu. Without looking, Jim ordered a classic, shaken not stirred. Patrick went with a Manhattan. Then it was my turn and something that had chocolate liqueur leapt out at me. I was drinking in the middle of a Thursday afternoon, why not?

Jim couldn’t handle it. “I bring you to the best martini bar in Lawrence and you order that!”

It had to be the only martini bar in Lawrence. Maybe the only one in Kansas. I held up the laminated menu. “It’s a real martini. Look.”

Patrick shook his head. “Why don’t you just order a milkshake?”

We had two more rounds while Meg put us all on trial: We were too old to be undergrads, too well-dressed to be regular grad students, so who were we? Did we all go to law school, or just me and Patrick? Was it really that hard? “And Jim,” she said like he’d slapped her ass, “How can you leave all that investment banking money for, what was it, an MFA in Mixed Media? What the Hell does that even mean?” That’s what Patrick and I wanted to know, so we loved Meg for saying it. For the way she said it. Meg in her ribbed, wife-beater T and cutoff jean shorts. Meg keeping up with the conversation while prepping the bar for the night—leaning against it to talk, across it to clean, stretching out to put glasses and bottles in place, bending down and over to pick up things, unseen things, from beneath the bar.

To learn more about R. Dean Johnson and his book, visit his website.