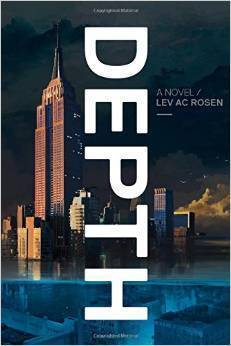 Take a dive into the first chapter:

***
She had the shot. It was lined up. She just needed to wait for the fog to clear. And it was going to clear in a moment. She could read the swirls of it, how it breathed and parted. New York City fog was lazy, like cigarette smoke.

A small vibration in her right ear. She clenched her jaw and waited. The fog didn’t clear. Her ear vibrated again. She sighed and whispered, “Phone ID.” A holoprojection beamed out from her earpiece, displaying a small screen in the corner of her vision. She glanced at it, and as she did the fog swirled open for less than a heartbeat, then closed like a lover’s kiss. She ground her teeth. Caroline Khan, read the display. “Answer,” she told the phone.

“I’m working,” Simone said softly. She was on a rooftop, four stories above her targets, and they were in a boat below her, but she was careful—voices could carry out here.

“I sent you a present,” Caroline said, her low voice smug. “You’re going to want to thank me.”

“You just made me miss my shot,” Simone said, “so let’s call it even.”

“No,” Caroline responded without a hint of guilt, “it’s not my fault you don’t turn your phone off while stalking.”

“Stalking is what people do for fun,” Simone said. “Following a cheating husband to get photos of him with his special friend is business.”

Simone rolled her eyes and squatted down, letting the camera hang low in her arm. She leaned against the railing enclosing the roof.

“Why am I going to owe you?” Simone asked.

“I sent some business your way. Attractive business.”

“The business, or the client?”

“The client is attractive, the business is lucrative and easy.”

“Is this going to be a long conversation?”

“Maybe,” Caroline said after a moment. “But only because I’ll be laughing a lot.”

“Just meet me at Undertow when you’ve got the money shot. Call if you still don’t have it by eleven.”

“Will do,” Simone said, rising back up and trying to point her camera in what she thought was the right direction. “Later.”

Simone touched the earpiece to turn it off. The fog rolled out for a moment, and the boat below her became perfectly clear. It was a floating restaurant, permanently moored, with a large, open deck made of wood, covered with tables and chairs. Fancy, too: white linens, low lighting, and waiters in tuxes. The couple she was looking for was sitting in a corner, far from the entry bridge. He, Simone knew, was Henry St. Michel, whose wife had hired Simone to tail him. She was a blonde and definitely not Henry’s wife. Most cheating spouses cheated with blondes.

She snapped a photo, her camera silently capturing Henry and The Blonde. The fog rolled back in, blocking her view. Simone looked at the photo she had just taken. They were sitting across a round table from each other. The Blonde’s back was to Simone, but Henry was fairly clear in the shot. He didn’t have a romantic expression; he had a nervous one.

Reprinted with permission from Reagan Arts.
To learn more about Lev and his book, visit his website.