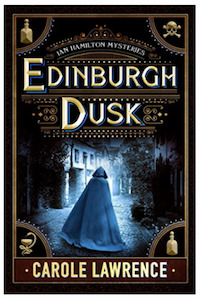 Ian arrived at the White Hart half an hour late, exhausted and famished. His brother had commandeered a corner table and was studying an anatomy book.

Donald Hamilton swiveled his bulky body around to face his brother. “Hello there.”

Ian scrutinized him for signs of intoxication, which did not escape Donald’s notice.

“Ginger beer,” he said, lifting the glass at his elbow. “Cheers, old boy.” Seeing Ian’s discomfort, he smiled. “Don’t stand there like Lot’s wife, man—what are you having?”

Donald rolled his eyes. “I won’t dissolve into a puddle of tears if you have a pint, for God’s sake!”

“That’s more like it.” Donald heaved himself from his chair. “Guard our table from the riffraff, will you?”

“That’s the worst kind of riffraff,” Donald shot back, heading toward the bar.

Ian slid onto the chair next to the one his brother had vacated. The table was none too clean, and as he pulled a handkerchief from his pocket, he heard raised voices from

across the room. Squinting through the haze of tobacco smoke, he spotted a pair of inebriated youths taunting a tall young woman trying to squeeze past them. Her face was

hidden by a mass of copper curls, but her hunched shoulders expressed the embarrassment of her predicament.

“Well, if it isn’t Miss P-p-prissy P-pants,” the shorter man said, waving a soiled handkerchief at her. He had a crooked nose and small black eyes, and reminded Ian of a small

“Such a lady wants to dirty her dainty white hands dissecting corpses,” said the other, a hulking blond fellow sporting a grimy bowler. “Whatever will her dear old mum think?”

“She’d b-b-better look to her mater, as she’s not likely to f-f-find a husband,” his companion declared, and the two of them bellowed with laughter.

Ian was across the room in three strides. A smart blow to the solar plexus sent the larger one sprawling to the floor as he seized the other by the back of his collar. Lifting the

little fellow half a foot off the floor, Ian pulled his face close enough to smell cheap whisky oozing from his pores.

“P-p-please,” the man squeaked, terror in his little eyes.

“I’d rather not skin my knuckles on a shrimp like you,” Ian hissed in his ear, “but I’ll give you half a minute to collect your friend and clear out of here.”

The crooked-nosed fellow nodded, swallowing hard. Ian let him drop to the floor, and he stumbled toward his companion, who was on his feet, brushing the sawdust from his

trousers. He tugged at the yellow-haired giant’s sleeve, but his friend was having none of it. Rolling up his sleeves, he glared at Ian, squaring off for a fight. The other patrons had

cleared to the sides of the room, leaving a wide circle. Caught up in the intoxicating aroma of violence, they shouted taunts and encouragement. If there was one thing that united

all Scots, it was their thirst for a good fight.

Ian’s opponent licked his lips and grinned, the bowler hat still clinging improbably to his head. Ian sized him up as being the heavier by at least two stone. He braced himself

as the large man lunged at him, swinging with both fists. Ian managed to duck a left hook, but a hefty roundhouse caught him on the side of his head, sending him reeling

backward into the circle of onlookers. A couple of stout fellows caught and steadied him.

“Good Lord, Ian, can’t I take you anywhere?” said the other. It was Donald.

Splinters of pain shooting through his forehead, Ian staggered back into the circle, where his opponent was waiting for him. Though intoxicated, the man was obviously skilled

in the art of fisticuffs. Ian revised his strategy. Doing his best to keep his distance while his head cleared from the blow, he circled his adversary, never taking his eyes off the man

as the shouts of encouragement for both combatants continued.

The barkeep’s feeble attempts at breaking things up were met with jeers and ridicule.

“If you don’t cease and desist, I shall call the police!” he whined.

“Christ, man, he is the police!” Donald yelled, but no one paid him any mind.

Ian’s training was in wrestling, where getting close to your opponent was essential, but his adversary’s size and the speed of his meaty fists made that a dangerous gambit.

Another punch to the head might well knock Ian unconscious. He needed to gain an advantage—but how?

He lurched forward, the bowler still perched atop his head, and Ian saw his chance. Reaching up, he flicked the hat deftly off the man’s head. Instinctively, Gordon grabbed for

the hat as it fell, and Ian took advantage of his momentary distraction. Sweeping in low, he tackled his opponent around the knees, bringing him heavily to the ground. Gordon hit

the floorboards with a grunt, Ian on top of him. Gasping for air, his opponent struggled to get to his feet, but Ian held him tightly in a head lock Twisting the crook of his arm

around the man’s neck, Ian applied pressure to his windpipe until his face turned scarlet and his body went limp. Quickly releasing his hold, Ian staggered to his feet amid cheers

“Attaboy—you showed him, by God!”

Panting heavily, Ian rested his hands on his knees and looked down at the prostrate form of his opponent, who lay very still. Alarmed, Ian knelt beside him and loosened his

collar. He didn’t appear to be breathing. Panicked, Ian looked around wildly at the crowd, but their attention was already turned to collecting bets and ordering the next round of

drinks. The young woman whose honor he had defended had vanished, as had Gordon’s comrade. Ian felt a hand on his shoulder and looked up to see the concerned face of

Reprinted Courtesy of Thomas and Mercer

To learn more about Carole and her book, go here.