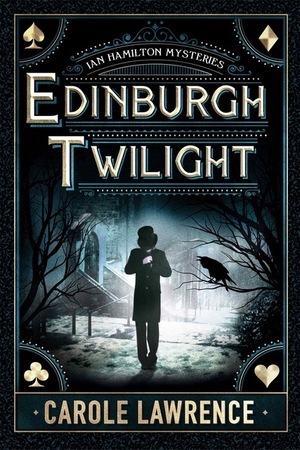 As he trudged up the steep incline to the top of Arthur’s Seat, Stephen Wycherly could not stop shivering. The sky was spitting rain, and a chill breeze blew in from the Firth of Forth, cutting through his already damp overcoat. But the fit of trembling that seized him as he reached the summit was more from dread than the biting February wind. Clutching the note summoning him to this godforsaken spot, he shielded his eyes from the rain and gazed around. He had not seen another soul on his lonely trek up the hill, which was hardly surprising—who in their right mind would venture out in this weather? And why did his tormentor insist they meet on this jagged outgrowth of rock on such a day?

Stephen fingered the money in his pocket. It was all he had—he hoped it was enough. He never imagined he would be a victim of blackmail; it was like a bad dream. He looked at his watch— already ten minutes past the appointed meeting time. His heart leapt at the thought that he had arrived too late for the assignation, even if it meant the ruin of his reputation. He was beginning to think it was a small price to pay to put an end to the creeping terror overtaking him as he gazed down at the city of Edinburgh below. After waiting a little longer, he was just about to leave when he was aware of a figure approaching him from the steeper trail that ascended the summit from the east. The man smiled when he saw Stephen, but there was no friendliness in his face, no warmth in those icy eyes.

“Of course I came,” Stephen said, projecting confidence he did not have. “Let’s get this over with.”

His gaze was fixed on a point over Stephen’s shoulder, and, his instinct for self-preservation overcome by curiosity, Wycherly turned to look.

That was all the distraction the other man needed. Stephen felt the garrote around his neck before he could turn around to face his opponent. Flailing, he staggered backward as his attacker tightened the ligature, hands clawing vainly at his throat. The last thing he heard before consciousness slipped away was a soft voice in his ear.

“There, there, now—it will all be over soon. Sweet dreams.”

Holyrood Park was deserted as Christopher Fallon began his long trek beneath a bleak February sky. His wife said he was a fool for taking exercise in such weather, but then, Bettina thought he was a fool for most things he did, so he didn’t let it bother him. The lamb stew she was making would taste even better after a brisk walk. His job as a cobbler required long hours of sitting bent over a last, and he enjoyed stretching his legs as he roamed the windswept plain, sandwiched between the majestic Salisbury Crag to the west and the volcanic peak known as Arthur’s Seat to the east.

The rain of the past few days had thinned to a light mist, and visibility was limited, but Christopher enjoyed this kind of weather—no use trying to explain that to Bettina, who would just roll her eyes and say he was daft. He was humming a little song to himself when he saw a dark shape on the ground to his right. Taking a few steps toward it, he peered through the mist to make out what it was. His first thought was that it was a bundle of clothes someone had left behind, lying in a crumpled heap in the damp soil. Just as he was wondering who would leave a pile of rags in the middle of Holyrood Park, he got close enough to get a proper look. He had been right about the clothes—but what was in the clothes made his limbs go cold. The body of a young man lay sprawled upon the rocky ground.

“Mary, mother of God,” he muttered, wiping his damp forehead, which had begun to sweat in spite of the chill air. He looked up—the body lay beneath the summit of Arthur’s Seat, the craggy ledge directly overhead. He had heard of people casting themselves to their death from its rocky heights, but had never given it much thought. It was obvious the poor fellow was dead—that much was clear from the vacant, staring eyes and unnatural stillness of the body. There were bruises and scratches on his face, and the odd angle of the limbs made Christopher’s head go woozy. It was as if he had been tossed like a rag doll from the rocks above, landing with his arms and legs all higgelty-piggelty, as his wife would say.

His legs took off at a run before he was aware of having willed it. High above him, a pair of pale eyes gazed down upon the scene, and a smile came to the face of the one who watched as Fallon hurried back in the direction from which he had come.