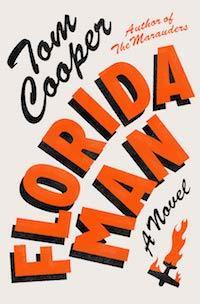 The boy came inside the girl.

Reed Crowe rolled off Heidi Karavas with a final shudder and moan and lay next to her in the gunwale of the rocking aluminum skiff. Some wee morning hour, the August air sticky with heat. The planetarium of the Florida sky, a thousand score of stars strong, glimmered down. The vast Everglades was stretched in every direction around them, miles upon miles of black swamp and saw grass hammocks and mangrove thickets. And to the west on the distant shore, like votives arrayed along an altar, shined the lights of Emerald City, town of Crowe’s birth, the beach houses and shanties and houseboats with windows aglow.

“The boy and girl were still catching their breath when Crowe said, “Puerto Rico.”

Heidi asked Crowe if he pulled out in time. He told her he did. The girl asked again. Crowe reassured her. And he was almost certain. Ninety-five percent certain. Still convincing himself, he said, “You hear me? Puerto Rico. How ’bout Puerto Rico?”

“You’re drunk,” Heidi said. She stood, hand on the gunwale, sweaty skin separating from the cold metal bottom of the boat with a tape-peeling sound. She picked up her mint-green panties. Slipped a thick shining thigh through a leghole, slipped the other leg through.

To the boy she was a vision. Her fulsome Greek figure, her wide hips. Her dark curly hair, sun-kissed from a summer almost past. Her blouse embroidered with little yellow and red flowers, the cotton startlingly white against her olive skin.

She was seventeen, he on the cusp of eighteen.

In 1960 they’d met during Hurricane Donna, in Emerald City’s hurricane shelter, a repurposed gymnasium. She was from south of Tarpon Springs, visiting her grandparents, a girl from a Greek sponging family, and right away Crowe knew he had to see her again. As soon as possible.

And before Donna had scythed across the state, he asked her on a date.

Three years later here they were, Heidi asking what the hell was in Puerto Rico. She settled next to him, pillowed her sweaty cheek against his chest.

They smelled like each other. Briny animal teenage lust.

Crowe popped a match and lit a cigarette. In the brief flare of light his green eyes were smirking. “Pamphlet in the mail the other day. A sign. Selling nice little houses on the beach out there, for cheap. Little huts.”

“You wanna live in a hut now,” Heidi said.

“Nice huts. Place you could live like a king. Dollar a day.”

They often played this game after lovemaking, talking about where they’d run away. Fantasies, pipe dreams.

He had no plans except far-fetched.

To learn more about Tom and his book, go here.