From the Standard Cyclopedia of Recipes 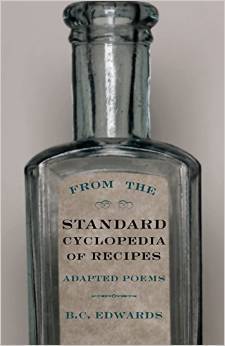 Gotham teacher B.C. Edwards has recently seen the release of his book of poetry From the Standard Cyclopedia of Recipes. He adapted poems from a book of the same name, circa 1901. The original Cyclopedia contained a variety of common household tasks from dying wool, to tempering iron, to making bird food, to curing cancer and small pox. B.C. kept the original title of each recipe, which often served as a springboard for the poem itself.

Here are a couple of bites:

There is a piece of iron between us,
straight and hard at first
but we have worked it.
Warped the iron
until it is curved now
to exactly us, fits the shape that lies in
us two embracing. A line that runs from where our faces meet,
the way we lay our necks on each other, the cut of our
embraced torsos,
tempered hot iron hips,
twine of legs.
When we separate, there is this piece,
grey thin strip barely shining
detailing the moment together
a whole new letter of the alphabet.
From this curve we can redraw the outline of us two lying there.
From this curve we can get it exactly right.

No. 62.
A simple Cure for Scarlet Fever.

Learn more about B.C. Edwards and his book here.