In the Course of Human Events 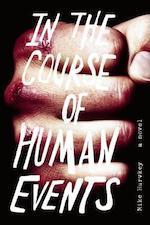 Gotham teacher Michael Harvkey recently saw the release of his novel, In the Course of Human Events. Set in the post-economic collapse of 2008, the novel follows Clyde Twitty, a down-on-his-luck Midwesterner who is taken under the wing of a charismatic anti-government extremist. Electric Literature says, "It feels as contemporary as news read on a Twitter feed, with the kind of ending that makes a reader want to hit ‘refresh’ again and again, hoping that something will change.”

Get a quick fix with this excerpt:

Clyde stared at the fire through the glass of the wood stove. He hadn’t prepared, didn’t know what to tell his uncle. “I might not, uh . . . ” A log shifted in the stove, bumping the door and settling. “I might not be seeing you for a little while.” Clyde wanted to look up, to see his uncle’s face, but he feared if he did that he’d lose it.

Willie rose unsteadily. Clyde reached out but Willie pulled his arm away. He limped across the room with his cane. “I don’t know if Jay Smalls is as good a influence on you as I mighta thought.” If he could have moved his head it would have been shaking.

“Look what’s happened since you met him. You came this close to pushing up daisies.”

“The way you’re looking at things now, I’m not so sure it’s for the good. And now you give me this ‘won’t be seeing you.’ You’re about the only person I see.”

Clyde’s heart sank. Selfish, everybody’s so selfish. He’d thought his uncle had been concerned for his well-being, but he just didn’t want to be alone. Clyde had hoped to have a nice time that he could remember later, something for the reserves. But he didn’t like his teacher being questioned. “All Jay’s done is open my eyes to the way the world really is.”

Willie leaned on his cane. “How’s that? The way it really is.”

All right. Why not? Might as well let him have it. “ZOG,” Clyde said.

“Nobody outside the movement does.”

“The patriot movement. The resistance,” Clyde said. “Since the creation of Israel, Uncle Willie, no matter who’s elected every few years in D.C., it’s a secret group of Jews who really run the country, the world, ’cause the U.N. and the U.S. and the Eurozone are all in it together. ZOG is powerful, wealthy, and the American people are nothing but puppets working themselves to death to fund ZOG’s interests. Which are,” Clyde used his fingers now: “Military industrial. Which leads to profits, which leads to economic disparity, which leads to global unrest, which leads to terrorism, which makes it easy for them to take away our rights, attack the Constitution, repeal the Second Amendment, and that’s just what’s happening today. Don’t get me started on what they got planned for the future.” Clyde shook his head but he wasn’t looking at Willie. “One thing I know now without a doubt, and I hate to say this to you because you work hard and don’t ever complain, but the greatest joke that’s been played on the working people of this nation is the American Dream.”

To learn more about Michael and his book, visit his website.