Into the Dangerous World 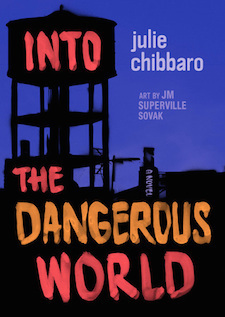 Gotham teacher Julie Chibbaro has recently seen the release of her YA novel Into the Dangerous World (art by JM Superville Sovak). Ror, a New York teenager growing up in the 1970s/80s, has never attended a day of school. She was raised on a commune that her father burns down, taking himself with it. In the aftermath, Ror and her remaining family find themselves living in a homeless shelter where she discovers the culture of street art and graffiti. Kirkus Reviews calls it “a thought-provoking, beautiful exploration of the artistic process.”

Steal a glance at this excerpt of Chapter 1.

The night Dado burned down our house, he came upstairs and into my room. In his arms, he cradled a thick roll of brown butcher paper that he must have bought near the chemical plant where he worked. He smelled of sulfur, like a lit match. I hunched over my sketches on the wood floor, drawing the serrated edge of a knife, sharp and ready for a heart. I always drew on the floor, my paper spread out around me. There was no other space on our whole four acres that could contain me.

When Dado came in, he set down the paper and kicked it. We didn't say anything, watching it roll out. He towered over me, and I couldn’t tell which Dado he was. He wore his combat boots, and seemed jittery. Across the room, the paper stopped with a bump under the window. I didn’t know what he wanted me to do with it—a wrong move could set him off.

I looked up just as he turned away and walked back out.

With my charcoal, I got my hand gliding across that paper like I had centuries of time and miles of surface to cover. Lately, Dado had been spending nights downstairs alone in his armchair reading Blake’s God-visions and studying those wild drawings of dancing people. He kept close watch on our dome house on the edge of the Kill, on a property once filled with people who danced just like in the Blake drawings. People who left one by one until it was just me and him, Ma and Marilyn.

I heard a shout.

No, I didn't hear anything, that’s what happened. The fire blazed quietly.

Dado built that dome house with his own calloused, blackened hands, and with boards he hauled from the landfill. He hammered it together with nails he pulled from old planks and straightened. Together, we formed the triangle struts with two-by-fours, bolted them in rows around the perimeter until we had a second story, until the apexes made a five-pointed star. We fitted the last five triangles together as a pentagon. Over it all, we nailed the plywood and framed glass, closing it in from the rain.

I didn't hear the crackling downstairs, the fire eating the dried wooden walls, the beams, the floors we had laid. Ma and Marilyn were making too much noise arguing in the sewing room, that’s what happened. Through my wall, I could hear only my big sister’s angry voice: “He’s crazy, you know that. We should go, Ma, like the others—let’s just go.” If she had shut up for one minute, I would have heard.

I didn’t know how long Dado was downstairs, burning.

Then Ma and Marilyn burst into my room, choking, coughing—smoke billowing in with them. The flames behind Ma petrified me.

“Open the window, Ror, get out, get out!” she shouted.

I couldn't think or move. Loudest thing going through my head was My drawings! Years, boxes of notebooks, sketchpads, zines, album covers. Ma threw my chair and smashed the window and shoved Marilyn through the hole. Flames licked the walls of my room. I could feel them melting my wool sweater, the back of my pants, my canvas sneakers. I smelled burning hair. My hair.

Ma came back for me.

I felt a searing up my neck, the burning; my throat seized. Ma slapped at me and grabbed me by the arm and yanked me up until I stood. She thrust me across the room; I plowed through the broken window, the glass catching my ear as I leaped toward the oak tree and slid down. Ma burst out and fell into the snow behind me, where Marilyn lay bleeding. I shivered, the sirens sounding far away, my skin howling.

I knew he was still inside.

Reprinted with permission from Viking Press.