Jack of Hearts (And Other Parts) 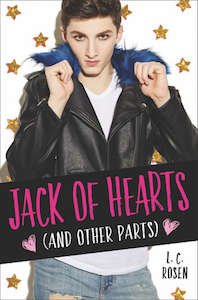 You are so cute.

I smile. A secret admirer? That’s sweet. Or creepy, maybe? I look up and down the hall, but no one is looking at me, waiting to see my reaction. I look back down at the paper. Black marker. Bad handwriting. I doubt it’s any of the other out boys in school. Ben is one of my closest friends and I am not his type. He likes bears—big hairy guys—usually older. I’m definitely not in that particular gay subset of wildlife (on Grindr, I unhappily checked the twink box, because I’m seventeen and hairless and slim— but muscled, from running track—why isn’t that a box?). And Jeremy Diaz thinks I’m a whore who gives queers a bad name, and Don Caul is way too focused on getting into Yale to take the time to write a love note. Maybe some new freshman? Or maybe someone still in the closet? Is this Ricky Gavallino’s way of finally trying to inch his way out? Oh god—what if it’s a girl?

“Hey,” Jenna Rodriguez says from behind me. I stuff the piece of paper in my pocket and turn around.

“Hey,” I say. She raises an eyebrow at me, barely visible under the tangle of long half-bleached hair.

She purses her tea-painted lips like she doesn’t believe me, but then shrugs, deciding she also doesn’t care. That’s why I love Jenna. If I want to keep something private, she doesn’t pry.

“So, I had this idea,” she says, sitting down. I sit down next to her, our backs against the lockers, her dark skirt pooling on the oor. “For the blog.”

Jenna was kicked off the school paper for, in the words of Principal Pattyn, “pursuing an agenda of aggressive anti– Parkhurst School spirit.” That was after she reported that Mr. Botts had crashed his car driving drunk one weekend. So she started her own blog—website, I guess—called The Private Line, writing about the stuff the school doesn’t want us to know. All the schools, really—the private schools. It’s not a gossip blog, like Famke Stein runs, with all the hookups and breakups and rumors. (I don’t feature on it as much as you might think— Famke is way more interested in the more popular boys and girls. But I do have my own tag.) The Private Line is actual, newswor- thy sort of stuff. Local news. Teachers getting red for whatever, department budget crises. Her mom is a reporter—the kind that travels the world and visits war zones and interviews dictators, so Jenna holds herself to a high standard of reporting. But lately she’s been trying to branch out. And for some reason, she wants me involved.

“Okay,” I say, opening my history textbook to the chapter I didn’t read last night.

“Oh god,” I say, bringing the textbook up to cover my face. “Why? What did you hear?”

“Well, I did hear you found a guy on Grindr who looks like Tom Blackwell’s dad and you invited him to the tennis match last week and made out with him in the stands opposite Tom so he’d play a lousy game.”

“I don’t know Tom,” I say, dropping the book. “I wasn’t even at the tennis game.” I know it’s not the end of the world, but I wish I could fuck around without any commentary in the girls’ bathroom. I guess I could stop listening . . . but that’s not going to happen.

Jenna shrugs. “Just own it. Use it. For this column.”

“Please?” she says in a slightly begging voice. “You can use it on your college applications.”

“How is that going to look? ‘Told people how to suck dick.’ That’s some serious Harvard material.”

“Okay, so not a sex column. Like, a relationship advice column. We can call it Jack of Hearts.” She makes a headline in the air with her hands.

“Right. And other parts.”

“I like that,” she says, hitting me on the shoulder. “We can call it that.”

“I haven’t had a boyfriend who lasted more than three weeks.”

“So what? You know what makes people tick. You’d be good at it.”

“I’d be a disaster.” I turn the page in my history book without having read it.

“Do it once.” Jenna clasps my arm with both her hands, her tawny fingers warm but her pewter-painted nails digging in sharply. “Please? I need a little spice. People aren’t as interested in the backroom politics of the teachers’ union as they once were. Famke’s kicking my ass with that story about the Miller twins at Edgemont dating the same guy without him knowing.”

I sigh. We both know I’m going to give in. “I just have to answer questions?”

“Yeah. I’ll give you a stack, and you pick one out and you answer it. Easy.”

“I’ll do one,” I promise. “But only because you’re my friend. Not because I want to.”

“You never know,” she says, reaching into my bag and taking out my phone. She knows the password and has it open in two seconds. “You might like it.” She hands my phone back to me—there’s a new mail app on it. I tap it open to see I have a full mailbox waiting.

“You already have the questions?” I swipe through the emails. There’s a little over fifty of them, but at least a dozen are just calling me a fag.

“I may have used the rumor mill to spread the idea that you were going to be doing this last week....That way I’d know if there was interest before asking you to do it. And I set up a spe- cial server that anonymizes the senders’ information. People feel more secure asking questions that way.”

“Thinking ahead,” I say, deleting the fag emails.

“Good to know what people think of when they hear my name,” I say flatly.

“Live it up,” Jenna says. “Better than not being known at all, right?”

“Sure,” I say, though anonymity sounds delightful. I know lots of kids want to be famous, and yeah, I like attention, but I’d much prefer it for things I do—like dress amazing and say witty things—than who I do.

“It’s like a public service,” she says in the voice she used when she ran for class president freshman year. “They don’t teach gay stuff in sex ed.”

“I can take a few days with these, right?” I ask, shaking the phone.

“Take until Thursday. Email me your question and response. I want to post your first column a week from today—Monday. And then the second one the Thursday after that. Then we’ll decide on weekly or twice weekly, depending on how people react."

To learn more about Carole and her book, go here.