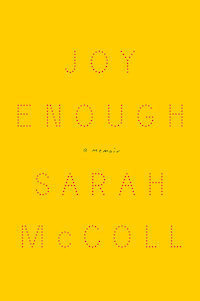 We only ever write one story, the writer I was beginning to love told me. Several months after my mother’s death, looking through stacks of paper in her sewing room, I found a yellow folder. “The Life of Allison Marie Young,” she wrote in felt-tipped calligraphy pen, “by her daughter, Sarah.” This was my third- grade project. Tell me what you were like when you were my age, I asked, then neatly wrote the most interesting parts on ruled notebook paper beside crayon illustrations. She sank a homemade raft in the Green River and sat astride her cousin Bonnie’s pony. Bonnie looked good in cheap clothes, my mother always said, and that’s all I know about Bonnie.

Tell me what you were like when you were my age, I asked in high school. We did most of our talking in the warmth of the car, waiting for a school bus that stopped a distance from our house. My mother wore her nightgown beneath a down parka and spilled tea on the floorboards. On the first hot day, the scent of sour milk haunted the car. She babysat, she said, and when the kids went to sleep, she ate leftovers from the fridge, didn’t wash the dishes though she had a feeling she was supposed to, and thumbed the parents’ copy of Tropic of Cancer for the sex parts.

Ice crystals scattered on the windows like field- borne burrs. I had woken that morning from a dream, I told her, in which I stood in a tunnel, my arms wrapped inside the peacoat of a boy as a train barreled toward us. “Well, that’s obviously about sex,” she said. And then, “Here comes the bus.” I slumped on and into the first seat, perturbed. She could decode my subconscious, so why did hers seem so opaque? I wrote a poem, which is what sixteen- year- olds do, and left it at her place at the kitchen table one night before bed.

“Dear Sarah,” she wrote in a letter she slid under my bedroom door. “If it seems that I am vague about my childhood, forgive me. It’s only that there is not much to tell. I was dreamy and lonely and liked to read magazines and ride my bike.”

I did not know how to ask a question impossible to answer. Can you explain what people mean when they say, You are just like your mother?

Now she is dead, and unable to answer, and still I cannot stop. There is comfort in asking. The possibility of discovery seems, at once, as real as the night sky and as difficult to measure as love.

Another surprise sewing room find, the motherlode: beside the plush camel chair she dozed in at the end, her head tipped back into the afternoon sun, a bag from Stop and Shop. It was overstuffed and heavy, filled with knitting needles, leather- bound journals, drafts of letters to doctors, friends, her therapist, my father. There were five copies of her divorce papers, and two- day planners from the 1980s. Neon Post- its popped from the pages like flags.

“Hope now?” she wrote on a small piece of lined, monogrammed notepaper in her thirties. “That I won’t just die and become fertilizer— that I won’t be forgotten as if I had never lived. That I’ll give good people to the world. That things will become clearer to me, that I’ll understand better. It really bugs me that I don’t understand everything already.”

Excerpted from Joy Enough: A Memoir by Sarah McColl. Copyright © 2019 by Sarah McColl. Used with permission of the publisher, Liveright Publishing Corporation, a division of W.W. Norton & Company, Inc. All rights reserved.