My Epic Spring Break (Up) 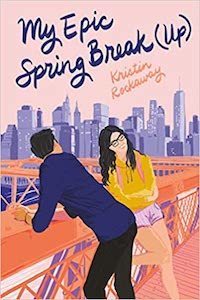 Growing up in New York City is a crash course in the art of self-defense. I don’t mean learning martial arts or the proper way to use a stun gun or anything like that. I mean, quickly and accurately assessing people and situations for potential disasters so you can avoid them before they happen.

That discounted MetroCard someone’s trying to sell you on the street? It’s a scam.

That guy sitting in the corner of the subway car, making kissy noises and hissing in your direction? Don’t make eye contact.

Basically, if you want to survive (and keep your apartment vermin-free), you need to know trouble when you see it.

And I know trouble when I see it.

This morning, trouble takes the form of Jason Eisler, strolling into American History with a goofy grin and an easy stride. On the surface, there’s nothing concerning going on here. Just a teenage boy rolling into class, hands in the pockets of his hoodie, backpack bouncing with each step.

But I know Jason too well not to be concerned. There’s a certain subtle glimmer he gets in his brown eyes when he’s up to no good. The first time I remember seeing it, we were in second grade, and he’d somehow managed to sneak a lifelike rubber tarantula into our teacher’s top desk drawer. When poor Ms. Chen opened it up, she went paler than Marshmallow Fluff, shrieking so loudly that one of the girls at table two started to cry. Five minutes later, the principal showed up in our classroom, his bushy eyebrows furrowed with disdain as Ms. Chen explained what happened. Jason wasn’t fazed, though. He just giggled, eyes glimmering, as he followed the principal out the door.

In the intervening decade, Jason’s pranks have become more sophisticated, more interesting, but that glimmer in his eyes is still the same. It dances a little now when he looks my way.

“What’s up, Ashley?” he calls from the front of the room. People turn to check me out, but I slide farther down in my chair and glare at the scratched desktop. I want no part of whatever he’s got planned.

The bell chimes to signal the start of the period, and five seconds later, Ms. Henley closes the classroom door. “Take your seats, please,” she says. After everyone settles in, she projects a slideshow about the Cuban Missile Crisis onto the whiteboard. You’d think she’d go easy on us since it’s the last day of school before two weeks of spring break, but that has never been Ms. Henley’s style.

“Today we’re going to discuss the role diplomacy played in . . .” Her voice trails off when the door squeaks open, and I think I see a thin curl of smoke wafting from each of her nostrils. Ms. Henley hates latecomers. Her shoulders hunch toward her ears, and I can tell she’s preparing to lay into this unfortunate soul with a tirade about time wasting and personal responsibility. But when she sees who it is, her shoulders relax again.

It’s Walker Beech, the opposite of trouble.

To learn more about Kristin and her work, go here.