Onward Toward What We're Going Toward 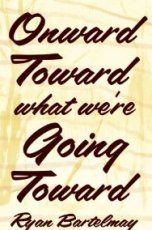 Gotham teacher Ryan Bartelmay has just seen the release of his novel Onward Toward What We’re Going Toward. The story takes us to Middleville, Illinois in the middle of the twentieth century, zeroing in on Chic and Diane, a couple struggling to carry on after the death of a son, and also Chic’s brother Buddy, who has brought an exotic wife and some exotic ideas to this Midwestern town. And that’s just the start.

Take a glimpse at the novel’s opening:

On the Trailways bus bound for Florida, Diane wouldn’t hold Chic’s hand, wouldn’t even look at it sitting on his knee like a dead fish. She pretended to sleep. Then she didn’t and glared straight ahead at the derby hat of the man in front of them. This wasn’t like her. For the last month, she had been chattering like a psychotic woodpecker about their honeymoon—they were going
to do this, they were going to do that, this and that, and this and that, and this—and here they were, and she was grinding her teeth loud enough he could hear it.

At a bathroom break in Kentucky, he asked her if she wanted a NuGrape or some Nibs. She huffed and stared out the bus window. Inside the filling station, he bought a bottle of Coca-Cola
from the vending machine and stood at the filling station’s screen door watching a few navy guys taunt a yip-yip dog with a stick. His mind flashed to Lijy, his brother’s wife. He wondered what she was doing right now. What was that back rub about at the reception?

The old man behind the pay counter said, “That Truman shouldn’t even be in Washington. My vote would have been for Wallace. That is, if I could get someone to watch the store so I could vote.”

Chic took a pull off his soda.

“Couldn’t though. My son doesn’t wanna have anything to do with it. And my wife, she spends all day at the sewing machine.”

“Nah. That dog’s fine. Seen it get hit by a truck, get back up and keep barking. We’re all like that dog. We all just keep barking.”

Chic dug a dime from his pocket. He was gonna get himself some Korn Kurls.

“You know if I was going to Florida, I’d go to Gatorland. I hear they got albino alligators.”

“Yes sir.” Chic set his dime on the counter.

“I’d find me a way to get to Gatorland. Don’t be letting your wife not let you see an albino alligator.”

Back on the road, Chic stuffed Korn Kurls in his mouth. He was thinking about that albino alligator. He’d never seen anything albino. There was a kid in his grade school class, a kid whose
name he couldn’t remember, who had real blond hair and everyone said he was an albino, but he wasn’t. Albinos had pink eyes and that kid had blue eyes. Then that kid moved away. Whatever happened to him? He probably went to high school somewhere, probably got married, probably got a job.

He looked at his new wife, her anger so obvious he could hear it whirling like a drill. “You haven’t said anything to me in . . . ” He looked at his watch. “. . . twelve hours. Now you tell me you can’t  believe me. What’s wrong with you?”

She cocked herself away from him and stared out the window.

The bus passed a billboard that read, “Drive carefully. The life you save may be your own.”
***

Reprinted by permission of Ig Publishing

Read more about Ryan and his book here.