Pickleball For All: Everything but the "Kitchen" Sink 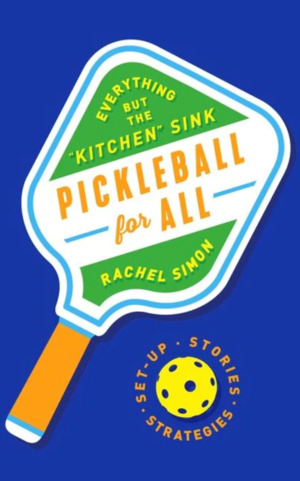 In March 2020, Kurt (my then boyfriend and now husband) and I were spending the early days of the pandemic in the same boat as millions of other people: quarantining with our family in the North Carolina suburbs, adjusting to Zoom meetings and work-from-home life, and entertaining ourselves with marathons of Tiger King. We were craving new ways to pass the time and keep ourselves distracted from the increasingly frightening news, but our options were limited. Walks? Too repetitive. Board games? Too tedious. Group hangouts? Too unsafe. In other words: we were really, really, bored.

And then, at the beginning of April, Kurt’s parents gifted him a set of pickleball paddles and balls for his birthday. Neither of them had any experience with the sport, but they’d heard from friends it was fun, easy to learn, and simple to set up. Besides, they reasoned, if we didn’t like it, the equipment was relatively cheap— even if we only played a few rounds before tossing the paddles in the back of a closet, they’d have been worth the buy.

Kurt and I were intrigued, if skeptical. Neither of us was an athlete by any measure, and our own limited history with pickleball was relegated to middle school gym classes. Still, it did seem entertaining, and with our Netflix queue dwindling alarmingly fast, we knew we could benefit from a new activity. So, after work the next day, we marched out to the driveway, set up a makeshift court with chalk and tape, and googled “how to play pickleball.” A few quick tutorials later, we had a vague sense of the game, a new definition of the word kitchen, and a desire to just get out there and try things out for ourselves.

Were we any good that first time? Absolutely not. Between my badly aimed serves and Kurt’s too-fast returns, the two of us spent the greater portion of that inaugural pickleball game in a perpetual sprint around the court, more focused on gathering far-flung balls than actually scoring points. Even our poor car, parked over to the side, suffered a beating during the game thanks to our wayward hits.

But man, did we have a blast. Despite our inexperience and lack of athletic ability, we found ourselves loving every aspect of the sport, from readying our serves to judging each shot’s merit to eking out the occasional long-lasting volley. The small size of the court made things simple to navigate, while the flatness of the paddles gave our swings a wonderfully lightweight, airy feel. There was no drag like in tennis, echo like in racquetball, or easy misses like in Ping-Pong. Pickleball, it seemed, was the best of all worlds—and with so few supplies needed, we could play it wherever we wanted, whenever we wanted.

Which, naturally, we did. Over the next several weeks, Kurt and I became pickleball enthusiasts, playing near-daily games after work together, often with his parents joining us for doubles. Off Amazon, we ordered a net and some extra paddles; from YouTube, we learned a few more rules and strategies, some of which we actually managed to put to use. By the end of the month, the four of us were so into the game that we even set up our own mini pickleball tournament, complete with team “uniforms” (that is, matching shorts and tees) and celebratory Pimm’s Cup drinks. (Kurt and I won, but his parents put up a fierce competition.)

It was a great way to spend our days, but outside the bubble of our home, the situation was continuing to worsen.

Reprinted by permission of HarperCollins. You can learn more about Rachel and her work here.