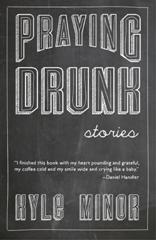 Gotham teacher Kyle Minor has just released his second short story collection Praying Drunk. Thirteen stories, each one kind of fascinating. Lots of buzz on this book. Flavorwire called it one of the most anticipated books of 2014, Publishers Weekly called it a “dazzling, emotional, funny, captivating puzzle,” and you can even get Praying Drunk shot glasses.

To give you a sip, here’s a very short story from the book:

The locker room walls were painted puke green and lined like a cage with metal hooks, and red mesh equipment bags hung from the hooks like meat. One of the bags was swinging, and I was swinging in it, and Drew McKinnick slapped at it and did his punching, and the janitor got me down.

What did my father say to the principal, and how many times had he said how many things? My boy is not eighty pounds yet. My boy is in the seventh grade. My boy is not a linebacker. Can’t you see I love my boy? If you had a boy to love what would you not do?

What did the principal say to my father? Did he say he had a boy and the boy got caught drinking in the tenth grade and he kicked his own boy out of school, same as anybody else? Did he tell my father what he told us once a year when they brought the boys into the gymnasium and left the girls away? I loved and love my wife, and she is not my ex-wife, not praise Jesus in the eyes of God, despite her running off with the Navy captain, despite it all I wait and wait and one day she will be restored to me. I know it in my heart of faith, I wait as Hosea waited, now let us pray.

Whatever passed or did not pass between them, this once it did not matter how much money McKinnick’s father gave the school, or how many animals he had veterinaried to health, or how many ordinances he had sealed with his mayor’s seal. This once I came home beaten and bruised and told my father, “They suspended him for three days.”

That night I slept and dreamt of three days free of red ears flicked blood red and slapped until I heard the ocean. The bathroom was mine to piss in, free of fear of footsteps from behind, one hand in my hair and the other on my belt, the painful lifting, then my head beneath the commode water.

That afternoon I skip-stepped to the bus, the Florida sun high and hot, and this once thinking the heat balmy and tropical rather than stalking and oppressive. Then, somewhere between the Route 7 and the Route 8, somebody grabbed me by the collar and slammed me against the black bumper. At first I thought it was him, because it looked like him, same dog teeth, same mocking smile, but bigger somehow, and how had it been kept from me he had an older brother?

“You think you’re something,” he said, and lifted me until my feet were off the ground. He was as big as my father. “You ever run crying on my brother again, I’ll beat you within an inch of your life, you hear me? I wouldn’t mind breaking you.”

He had me up against the back of the bus, and somewhere somebody had taught him how to do it, and his brother, too. I can see their faces now, but younger, fleshier, their father pressing their bodies to the wall, and then, older, leaner, their sons looking down at their fathers in their fear, learning.

***
You can read more about Kyle and his work here.

Reprinted by permission of Sarabande.