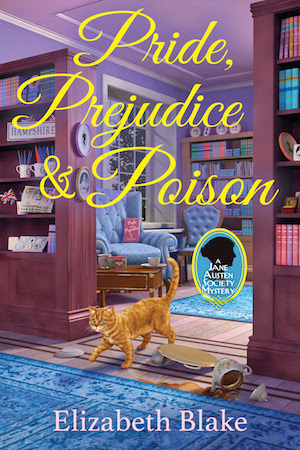 Erin headed north, toward the North York Moors National Park. Clouds gathered over darkening hills, chased by the wind as it rolled over the fields. After pulling up at one of the trail head car parks, Erin struck out over the moors. She wasn’t going to let the weather spoil her walk – if you did that in Yorkshire, you’d never go out.

She had walked less than two miles when the sky began to spit a fine mist of rain. Increasing her pace, she spied a figure coming toward her across the moors. Though a quarter of a mile separated them, she recognized his gait. Hands in his pockets, his wind-blown, wheat-blond hair forming a halo around his head, DI Hemming strode rapidly toward her, covering the distance between them so quickly she didn’t have time to compose her thoughts.

“Fancy meeting you here,” he said, only slightly out of breath, though the hills were rugged and steep. Instead of his usual jacket and tie, he wore a brown cardigan over a black turtleneck, and woollen knee breeches tucked into green Wellies. The way the black sweater set off his yellow hair made her catch her breath a little.

“Who’s the stalker now?” she said.

He gave a wry smile. “What do you say we call it a draw?”

“Are you playing hooky today?”

“I get some of my best ideas roaming the countryside,” he said, flashing a smile as the sun made a last ditch attempt to poke through the rain clouds, glinting off the gold in his hair. Out here, he seemed more relaxed and open, even younger than the stern-faced detective he appeared to be while on the job.

“Not the best day for it, perhaps,” she said, drawing her jacket closer as a gust of wind hit them.

“What brings you out to roam the moors?”

“I get my best ideas here too.”

“What sort of ideas?”

“For my poetry,” she said before she could stop herself. She barely knew him – why was she telling him things she kept from her closest friends?

“You take after your august ancestor, then.”

“Hardly. I lack his talent.”

“False modesty?” he said, cocking his head to one side. She couldn’t help notice how well-shaped it was, with the high, noble forehead and prominent cheekbones.

“Nothing is more deceitful than the appearance of humility. It is often only carelessness of opinion, and sometimes an indirect boast.”

“Was Jane Austen talking about you when she said that?”

“What I lack in talent I try to make up for in fervor.”

“With those I have never seen before,” she finished for him. “So you have added Jane Austen to your reading list?”

“Since being on this case, yes.”

“And what have you learned?”

“That we do not suffer by accident,” he said as a distant rumble of thunder shook the air. “We’re in for it now,” he added as they watched a jagged bolt of lightning jut across the northern sky. “We’re miles from shelter.”

“There’s a stone hut about half a mile that way,” she said, pointing to the direction she had just come from.

“I’m sorry, you’re only allowed to quote Austen,” she said, as her toe caught a protruding root, and she fell forward. Before she knew what was happening, his arms were around her, cushioning her fall. She felt his hands grip her shoulders, the firm fingers long and strong, as she inhaled the smell of him, a piny, woodsy aroma, like smoldering fireplace logs. Feeling the blood drain from her head, she dared not look at him. “Thank you,” she said. Extricating herself from his grasp, she drew into herself like a cat.

“The ground here can be treacherous,” he said as thunder sounded, closer this time, followed by another streak of lightning. Wind whipped across the bare ground, slashing at their faces, nipping their ankles like an angry dog.

“There it is,” she said, pointing to a distant stone structure as fat raindrops toppled from the sky. “I’ll race you!”

“Do you think that’s a good idea?” he called after her as she dashed off across the moors. “You might fall again!”

But with the wind whistling hard and high in her ears, she could not hear him.

Reprinted courtesy of Crooked Lane Books.
To learn more about Carole and her book, go here.