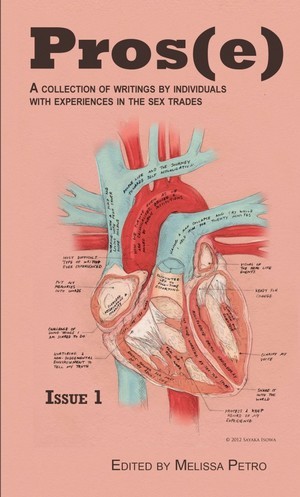 Gotham teacher Melissa Petro edited the first issue of Pros(e), a literary journal from the Red Umbrella Project—an organization in New York City that amplifies the voices of people in the sex trades through media, advocacy, and storytelling programs. In the first issue of Pros(e), you will hear ten people tell their stories. Prepare to be entertained and moved and surprised.

Here is a glimpse of Melissa’s introduction to the journal:

No matter how our path leads us to it, trading sex defines the people who do it like no other job, trade, occupation, or profession. No matter the complex realities of our experiences, we are thought of as inherently damaged victims, either before or as a result of our profession. Popular representations focus on sex, salacious details, and the potential for sexual exploitation of vulnerable people. They speak over us or for us, assuming we are incapable of speaking for ourselves.


Like most people, as a child I internalized the belief that the life of a sex worker was, if not worthless, worth less. I grew up with no knowledge of the sex industry short of Dateline specials and made-for-TV movies, cautionary tales about girls without families or backstories, girls with fake names like "Candy" or “Mercedes,” prostitutes existing only from the waist down. Girls who sold sex were fishnet-stockinged legs leaning into tinted windows idling at red lights. They were girls—never women and certainly never men, and trans women and men were completely invisible. Foolish and desperate, prostitutes and other sex workers were the butt of jokes.

When I became a sex worker, it follows then, I wanted to believe I was exceptional. Raised by my working class, more-or-less single mother, I had clawed my way up from white trashdom to make it to college and, eventually, to New York City where, smart and resourceful, I felt driven to succeed. At the time I sold sex on Craigslist, I was a graduate student at The New School, pursuing a Masters degree in Creative Nonfiction. Thanks to having worked in the sex industry, money was no longer the problem it had been growing up. And yet the money I made in the sex industry was no cure for a growing confusion I felt about myself and my place in the world—confusion that, by twenty-six years old, had become a way of life.

For some, the act of writing is form of social justice, and writing can be a powerful vehicle for social change. For me, what began as a source of personal healing became my means to enact political change. When I lost my job as a public school teacher for writing about my sex work past, it became my mission to encourage other individuals with minority experiences to inform, engage and inspire audiences by turning their personal experiences into literary nonfiction. I teamed up with the Red Umbrella Project, an organization that does media, storytelling, and advocacy programs by and for individuals with experiences in the sex trades, and we launched The Becoming Writers Workshop, an eight-week memoir writing workshop for people who are currently or formerly involved in the sex trades whether by choice, circumstance, or coercion. In three-hour sessions taught each week in the workshop model, participants read and discussed mentor texts, wrote and shared their work, critiqued one another’s writing and engaged in the process of revision. The course culminated with the publication of this anthology and the public performance of the work in it at the Red Umbrella Diaries, a monthly storytelling event that Red Umbrella Project produces in New York City.


Reprinted by permission of the Red Umbrella Project

You can read more about this journal here.