Ruby on the Outside 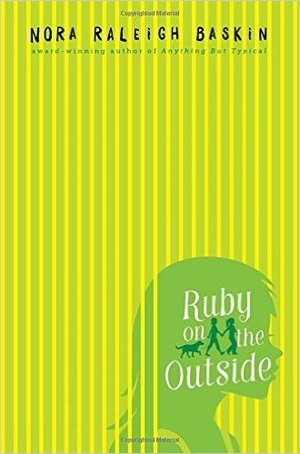 Gotham teacher Nora Raleigh Baskin has just seen the release of her middle-grade book Ruby on the Outside. Eleven-year-old Ruby Danes is about to enter middle school with a big secret: she’s been living with her aunt for the past six years because her mom is in prison. Kirkus Reviews calls it, “a deeply compassionate exploration of an experience underrepresented in children's literature.”

Take a look inside Chapter 14:

Rebecca had all the answers. She was older than me and had been coming to the Bedford Hills Children’s Center much longer. She had both her mother and father in jail and she knew a thing or two about jails and prisons, parole hearings, clemency boards, and well, pretty much everything and when I first met her, she scared me.

She was one of those tough girls. You can find them everywhere, not just in prison. I heard that there are plenty of tough girls in the middle school, ones that sneak out of the cafeteria to hang out in the bathroom, leaning on the wall or blocking your way to the stall. I heard some girls hold in their pee all day because they are too scared.

But after I got to know her, Rebecca wasn’t really like that. She just wanted other kids to think she was.

“Look what up?” I asked her. We were both sitting in the seats inside the trailer. It was raining and instead of making us wait outside getting wet, like we usually have to, they let everyone pile inside the trailer and wait. There was a little corner with little kid seats and some old books. Rebecca looked funny sitting in one of those seats. I bet I looked funny too, but she must have been at least thirteen. It was just a little while after Tevin stopped coming.

“You can look it all up,” she said. “Go on the internet. Google your mother’s name. It’s all public record. Court documents, newspaper articles, even transcripts of the trial if you know where to look. If you know how to search.”

It seems funny, now, that I never thought to do that. But at the time, it seemed perfectly normal.

“Did you do that?” I asked Rebecca.

I knew that her dad was in jail, too and she had told me that after visiting her dad in prison in Ossining made Bedford Hills looked like a four-star hotel.

“Sure I did,” Rebecca told me. “When I was about your age. Maybe a year older, like around twelve. I learned everything and let me tell you, it wasn’t pretty.”

I can see Matoo sitting in one of the regular seats by the door, waiting our turn to show our papers, show my birth certificate, empty our pockets, sign the papers and begin the process all over again, for the hundredth time or more. Doesn’t matter if you’ve been here once, or a million times, it’s the same every time.

I had no idea what she meant by that, but I could tell she was angry.

I never thought like that. Why would I? I can’t change it. Matoo says the past is the past.

What good does going over it do? What good is talking about it?

“So are you glad you found out?” I asked Rebecca.

She got quiet for a bit.

She didn’t answer me but I could tell whatever she found out, wasn’t what she thought it was going to be. Let’s just say that conversation with Rebecca didn’t exactly inspire me to want to run home and do the same thing.

At least not that day.

Reprinted with permission from Simon & Schuster.
To learn more about Nora and her book, visit her website.