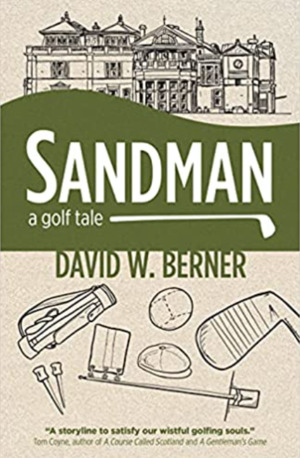 An excerpt from the first part of David Berner’s novella Sandman: A Golf Tale:

Most everyone called him Jimmy. A few called him Jack. There were those at Old Elm who were unsure if either was his real name, but he answered to both, nonetheless. The talk had been that he grew up somewhere nearby, but like this name, this was uncertain. And if someone did know for sure, they didn’t say. Most players would call out or tip their hats as they walked up the fairway and the short hill toward the 5th green. Jimmy, in his soiled Top Flite ball cap would wave and smile, craggy and crooked. He was always there, it seemed, sitting on his coat near the maple at the property fence a few yards west of the green, encouraging a putt to fall or clapping for a good chip shot. But it had been several days now, and no one had seen Jimmy.

“He must be on a bender,” the young boy said, propping his stand bag on the fringe off the left side of the green. “He kind of disappeared.”

His friend, another boy about the same age, shrugged his shoulders.

“We’ve been doing this for two summers now, you and me, playing almost every day and every time we see that guy,” the first boy said.

“I heard he sleeps in that sand trap,” said the second boy, pointing to the green’s only bunker. “Like a goat or sheep or something.”

“I think they’d throw him out if he really did that.”

“Like shit. Booze, probably,” he said, stroking his putt to gimme range.

The first boy’s shot had landed on the green’s apron. He used his putter to knock the ball a few inches beyond the cup.

“Pick it up,” his friend said.

“Remember that time he pretended to be an announcer, doing play-by-play like the guys on TV?” the first boy asked. “Here we are at Augusta,” the second boy whispered in a golf voice. “Yep. It was funny. I think you made that putt, and he cheered like somebody in the gallery on the tour.”

As the boys threw their golf bags on their shoulders and headed for the 6th tee, the first boy wondered aloud, “Maybe he died or something.”

Jimmy was thin and gaunt, his shoulders slumped into his bony build, his hands spotted from the sun, his temples held deep wrinkles, his voice full of tobacco smoke. If a golfer got close enough, he could see his yellow teeth, his salt-and-pepper stubble, and the red, blotchy skin of his cheeks. His eyes, however, deep brown like coffee beans, always appeared clear and alert, and around his neck he wore a small silver cross that glistened when the sun hit it at a particular angle. One might bet he never took it off.

Reprinted with permission from Roundfire Books. You can learn more about David and his writing here.