Sex and the City and Us 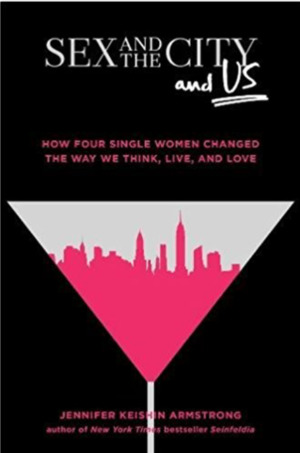 I left my fiancé for Sex and the City.

At the time, in the early 2000s, I was in my late twenties. I didn’t know who I was, and it showed. One day I was wearing a striped sweater and beige slacks, purchased from a mall near where I lived in suburban New Jersey, to work at my magazine job in nearby New York City; the next day I was buying black spiky heels, a hot-pink miniskirt, and a black T-shirt from a thrift store in the city’s punk-rock-steeped East Village neighborhood. I even recall a one-month hippie phase with faded jeans, fringed belts, and off-the-shoulder peasant shirts that I thought were particularly cool to wear to literary readings in dark downtown bars. Very Joan Didion.

I lead with the clothes because Sex and the City demonstrated how much they can mean. They indicated, for me, that so much was wrong, but that something right wanted to emerge. I was trying on selves. I was searching for an identity beyond what my upbringing in the Chicago suburbs, as the child of a dad who went to an office every day and a mom who stayed home with my younger brother and sister and me, presented as my ready-to-wear options: girlfriend, wife, or mother. I wanted a nameplate necklace like Carrie Bradshaw’s and a distinct, authentic, messy identity to go with it. Sex and the City helped me find myself.

I fell for the show immediately when it premiered on HBO in the summer of 1998. As a TV nerd, I watched from the beginning; I read my Entertainment Weekly and other pop culture magazines dutifully, and the hype told me to pay attention to this one. The show followed four New York women through their simultaneously harrowing and glamorous dating lives. Carrie, who writes a sex-and-relationships column for a New York newspaper, narrates with excessive punning and digestible insight into modern single life. Charlotte longs for a traditionally romantic handsome prince, a type conspicuously absent from the Manhattan dating pool. Miranda prefers to focus on her career as a lawyer and make wisecracks rather than actively pursue the frustration of dating. And Samantha, the oldest of the four, has long since turned off her romantic longings in favor of sexual conquest.

My fear would, however, eventually give way to a longing for a larger life like that depicted on the show—and this shift would mark the biggest turning point in my adult life. This impact of what many have derided as a featherweight TV show is what, nearly twenty years later, inspired me to find out how author Candace Bushnell, and then a group of writers and producers, turned their own life stories into a show that could so profoundly affect others’ lives. In this book, I will share that story—all of those stories—with you.

To learn more about Jennifer and her book, go here.