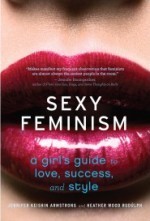 In March, Gotham teachers Jennifer Keishan Armstrong and Heather Wood Rudulph saw the release of their nonfiction book Sexy Feminism: a Girl’s Guide to Love, Success, and Style. The title explains it quite well, and it might help to know that the book springs from their website Sexy Feminist: the no-guilt guide to being a modern feminist. If you’re feeling sexy and/or feminist, you might like this glimpse of the book:


While our feminist foremothers of the 1960s envisioned women standing united to rise to equal power with men, the reality, as more and more women have entered the workplace, has been women often at odds with their female coworkers. The vision represented by the 1980 movie 9 to 5—of female secretaries banding together to revolt against “sexist, egotistical, lying, hypocritical bigot” bosses—has hardly come to pass.

That doesn’t mean we can’t get there. For starters, why not seek out a female role model? You’ll both benefit from the relationship: she from the relief of having another woman on her side, you from her wealth of experience in getting ahead in a sexist world. If you’re in a position to be that female role model, why not seek out some younger women to mentor? You’ll be helping womankind and boosting your own ego. There’s nothing more fun than having starry-eyed fans who want to be just like you. Plus, if you wait five or ten years, they’ll be in positions to help you out. You’ll have a whole secret army of your protégées stationed across your industry, ready to do your bidding while you kick back and relax. Sure, you can mentor men too—and don’t forget to seek out your own male mentor if that’s who’s dominating the top ranks—but the women will appreciate it more.

Growing up in poverty in rural Mississippi during the 1960s, one young black woman never lost her spirit. Despite enduring racism in the world at large and abuse at home, Oprah Winfrey knew things were going to change for her. She knew this because of Mary Tyler Moore.

When the sitcom first hit the airwaves, in 1970, no one had ever seen a character like Mary Richards. She was an independent, career-driven woman in her thirties determined to make it in broadcasting. And she was single! The program redefined how women were portrayed in television. And in sweet-but-feisty Mary, a feminist icon was born. An icon who inspired millions, and not just single white midwestern women in their thirties like her; because of Mary, that young woman from Mississippi became one of the most influential women in the world. Mary Tyler Moore “was a light in my life, and Mary was a trailblazer for my generation,” Winfrey has said.

Witness the power of a positive role model.