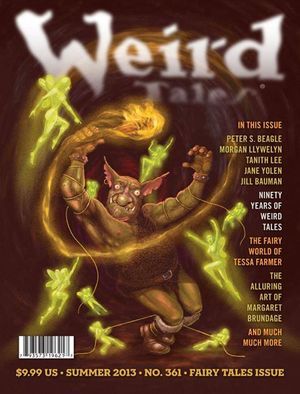 Gotham teacher Carole Bugge contributed the short story “Slaughter House” to the March issue of Weird Tales, a magazine dedicated to fantasy and horror. The story behind the story is interesting. A story called “Slaughter House” first appeared in Weird Tales in 1953, written by the great Richard Matheson. The magazine asked Carole to write an “homage” to the piece for their 50-year anniversary issue, so she wrote a prequel to Matheson’s story, giving it the same title. It’s a ghost story, a damn good one, so if you scare easily don’t read the opening paragraphs that we present here:

###
I don’t suppose many who read this will have the misfortune to encounter pure evil, as I have.  One thing I know: it changes a person. Try as you might, you are not likely to forget the experience. I’ve tried, by the good Lord, and I can’t manage it, so I set this down in writing hoping to ease my guilty soul, and perhaps help someone else who chances to read it.

I am simple girl—a woman now, I suppose, though part of me was frozen forever on that terrible night years ago, so that I feel in many ways like a girl still. Few people survive such an experience changed for the better; most often they’re changed from the worst. For me it was a kind of freezing—I remain forever stuck where I was that night, unable to move forward with my life.

But this story isn’t about me, Mary O’Gary, it’s about the people I worked for at the time, the Slaughter family. They were grand people, and lived in a grand house, so they did. Their only daughter Clarissa was as beautiful a woman as ever walked this earth. My dear mum, God rest her soul, used to say, “Beauty is as beauty does,” and if you believe her, then Clarissa Slaughter was as ugly as the crookedest spider that ever spun a web.

I came to work for the Slaughter family after Mum passed out of this world into the next, just before the turn of the century. I knew how to sew and iron and cook, and soon advanced from scullery maid to ladies’ maid, working for both Mrs. Alicia Slaughter and her daughter Clarrisa.  The family wasn’t grand enough to have a maid for each lady of the house—indeed, by the time the new century rolled around, there was much talk of equality in society—even votes for women. Mrs. Slaughter’s unmarried sister Katherine was quite a staunch suffragist herself. She was a bit too manly for me, with her cigars and sturdy shoes, but I did admire her independence.

Mrs. Slaughter herself was more traditional. She did confess to me that she sympathized with her sister, though I was on no account to tell Mr. Slaughter about it. And I never did—if I say I will keep a secret, I will carry it to my grave. But some secrets are too much for the thickest of caskets, and leave even the dead sleeping fitfully. So at the risk of betraying the entire family, I vowed to tell what happened in that house so many years ago.

A girl like Clarissa Slaughter is bound to have many admirers, which she did, but there were two in particular, John and Saul Edelman, of a wealthy and prominent family in town. Jewish they were, their father a well-respected physician with a thriving practice, and a finer looking pair of brothers you would be hard pressed to find. John, the elder, was tall and robust as an oak tree, with a fine head of black hair and a ready laugh. A few years younger, Saul was slim and sensitive, with the deepest, darkest eyes I ever did see.

To read more about Carole (AKA C.E. Lawrence) and her work, go here.